Russia presents Lithuania with an ultimatum: agree with our conditions or we halt your project 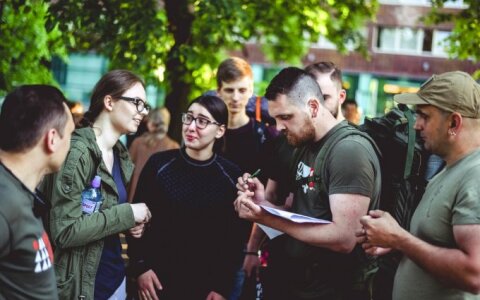 It is unfortunate, but this year the organisers will face difficulties. Such hints were already bandied around by Kremlin propaganda outlets Baltnews and Sputnik in March by unnamed individuals, predicting that this year the project Misija Sibiras (Mission Siberia) will be obstructed. The threat was realised on Friday.

Wanted to punish – found a reason

An individual identified only as Vytautas stated on one of the outlets, linked the "potential difficulties" with the then only planned step by Lithuania and other states – the expulsion of Russian diplomats in response to the poisoning of Sergei Skripal in the UK.

"And I do not want to believe that common Lithuanians and Russians will become hostages to these political games. That there are fewer diplomats in the Russian embassy and the Lithuanian embassy in Russia will influence visa-issuing times.

Meanwhile the Russians can completely obstruct the next stage of Misija Sibiras," "Vytautas" told the propaganda outlet. That said, Russia responded to the expulsion of diplomats by reciprocating and expelling Lithuanian diplomats, but the question of Misija Sibiras was not raised. Until now.

On Friday, the Russian embassy released a statement, which declared that in response to unfriendly Lithuanian actions – obstructing Russian organisations to deal in reburying soviet soldiers and constructing monuments to them – the Kremlin is responding in kind.

"The Russian side is forced to stop the activities of the Misija Sibiras project – we have warned our Lithuanian colleagues of this a number of times over the past few months. This measure will be in place until Lithuania creates real possibilities to renew the activities of military memory in Lithuania.

The principles of bilateralism are decisive. We invite the Lithuanian side to renew negotiations on the Russian – Lithuanian international agreement on military and civilian burial places, victims of war and repression," the Russian embassy statement reads.

Russians wish to build monuments wherever

The main Russian complaints are made over a number of reasons. The embassy's statement declares that over 80 thousand soviet troops and another 200 thousand POWs are buried in Lithuania.

Their places of burial are cared for by specifically the Russian side, who together with the Lithuanians has prepared an intergovernmental agreement project intended for the burial places of military and civilian victims of war and repressions.

The Russian embassy statement claims that the bilateral dialogue has been frozen, emphasising how the Lithuanian Foreign Ministry openly states that Vilnius is uninterested in signing the agreement, albeit according to Delfi information it is the Russian side, which refuses to sign. Nevertheless, the Russian embassy gleefully reminds that the agreement directly links the maintenance of soviet troops' burial places in Lithuania and that of Lithuanians exiled into Russian territory.

The statement also emphasises that Russia has done nothing to obstruct Lithuanian repairs and maintenance of Lithuanian gravesites, but that Lithuanian official structures obstruct or completely block any Russian memorial activities.

A complaint was levied at Lithuanian intelligence services noting in their reports that Russia is seeking to exploit the repairs and maintenance of soviet troops' burial places to realise political objectives in Lithuania through historical means.

Another issue taken up by the statement were the "strict cultural heritage maintenance rules", based on which last year "repairs and reconstruction of certain military burial sites" were initiated. These works angered Russia because the new regulations specify that the maintenance and repair financing of real estate of significance to foreign states "can only be enacted through responsible local government institutions."

On June 27, a new redaction of maintenance regulations for real estate present in Lithuania of significance to foreign states was approved. It outlines detailed regulation, which ensures transparent, secure, effective and legal means for foreign states to repair and maintain gravesites based on Lithuanian law.

The embassy complains that the regulations are not specific on financing measures and that the embassy cannot breach Russian Federation law and give Lithuanian institutions funds to use for the necessary repair works competitions. According to the statement, under the new rules, Lithuanian municipalities have initiated wilful repairs or even removals of memorial plaques.

At the same time, the Lithuanian side stands by the position that the Russian side has been acting out of line when repairing soviet troop gravesites. For example, in Vilnius Antakalnis cemetery territory for World War II veterans, without coordinating with respective institutions, the remains of several individuals were reburied and monuments were built in 2017.

According to Department of Cultural Heritage (KPD) director Diana Varnaitė, one of the remains were taken from Trakai, another from Švenčionys region. Whether the remains are truly those of troops, the KPD representatives do not know because the reburial was done without the knowledge of specialists or confirmed research. The idea of potentially dismantling the monument was attacked by both the Russian Union and Russian embassy, which officially mentioned about a potential retaliatory measures – halting Misija Sibiras.

Misija Sibiras is a project organised by the charity and support foundation Jauniems. During the project youth travel from Lithuania to Siberia and other places of exile for Lithuanians, Lithuanian gravesites are repaired, meetings are held with Lithuanians who still live there and the news is shared with the Lithuanian and world communities.

The project has continued for 12 years, during which 16 expeditions were held, more than 150 gravesites were repaired, more than 60 Lithuanians or their relatives remaining in Siberia were met. Every year, almost a thousand people express interest in participating and join the selection process.

This year, a whole two teams of twelve people each were to depart, with one team travelling on a more Southern route and another – more Northern. Both teams would have started their mission in the same place and ended around Krasnoyarsk, they would have taken separate routes to travel along, in the South and North respectively.

More than 950 applications were received this year, with a pre-selection of 80 chosen in May. They tried their strength in a trek of 52 kilometres, travelling in the forests, swamps and fields of Ukmergė district, also repairing the homestead of partisan brothers Vytautas and Feliksas Bagdonavičius.

The trek tested not only physical capabilities, but also teamwork skills and psychological preparedness. The trek also included a dramatization of anti-Soviet resistance fights, which formally irked the Russian embassy, which described it as a large-scale propaganda campaign with an accusatory context targeted at Russia.

This position of the Russian embassy contradicts the actions of Russian ambassador A. Udaltsov. Last year, in an act that surprised even Lithuanians, after a traditional placing of a wreath at a memorial for soviet troops on May 8th, he and his delegation came to another monument – one for those, who died for Lithuanian freedom, which is several hundred meters away. The ambassador not only placed a wreath, but also respectfully bowed to the monument, which is primarily intended to Lithuanian partisans, who fought against the Soviet Union.

Officially, Moscow views ant-Soviet resistance as the operation of illegal armed groups against Soviet government and Lithuanian partisans – nationalist groups or simply bandits. Last year, the Russian embassy laconically explained to Delfi that Moscow views such a step by the ambassador only as a commemoration of the people, who "fought during the Great Patriotic War against German attackers" and denied the fact that Lithuania fought against the USSR.

This year A. Udaltsov did not turn to the monument to partisans, instead going to the nearby graves of the victims of the events of January 13. Here, the Russian delegation members also placed flowers and bowed to the defenders of freedom.

Will continue to repair exile graves

The head of Misija Sibiras Raminta Keželytė confirmed she received information from the Russian embassy that the Misija Sibiras team would not receive visas.

"We interact regarding visas and other technical details of the journey with the Russian embassy in Lithuania all the time. This happened this year as well. It is unfortunate that there is a risk of the Misija Sibiras expedition not being held, but I am hopeful that the situation will change and the expedition will depart as planned on July 17.

There is certainly enough time to the date still. I wish to emphasise that Misija Sibiras is not a political project, which influences other gravesite repair and historical memory initiatives in Lithuania or Russia," R. Keželytė said.

The Ministry of Foreign Affairs has expressed regret over the statement by the Russian embassy in Lithuania.

The Russian embassy's expressed motivation is supposed obstructions to the repair and maintenance of soviet gravesites and monuments in Lithuania, according to the press release.

According to the Lithuanian Foreign Ministry, this demarche is nothing other than an attempt to pressure Lithuanian domestic decision-making processes and force the signing of an intergovernmental agreement, which does not suit Lithuanian national interests.

The comparison by the Russian embassy of soviet gravesite repairs with the repairs of exile burial sites is baseless. Misija Sibiras' activities are not political, being a purely civic, humanitarian public initiative, whose goal is to honour the victims of Soviet repressions and exiling, the maintenance of their burial sites.

The Lithuanian Foreign Ministry hopes that the Russian Federation will shed its biased and baseless perception of Misija Sibiras activities and will not create artificial barriers or seek a pretext to halt this youth initiative.

Russia presents Lithuania with an ultimatum: agree with our conditions or we halt your project