Russia couldn't find a future but wants to manage the past 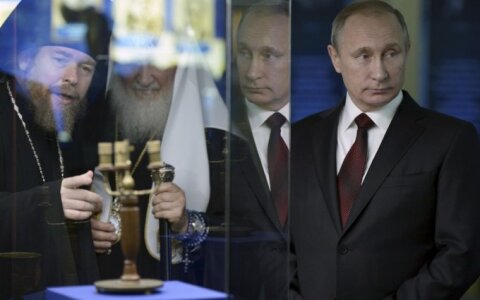 Next year Russia will hold presidential elections. But there are some problems. First of all, Russia is not a democratic state. In "Freedom House" rankings it belongs to the "not free" countries category. In 2017 the country received an evaluation of only 20 points from 100. It means, that in the short-term we should not expect free and democratic elections in Russia.

It is predicted that head of the state Vladimir Putin will seek re-election for a further term. He could officially stay in power until 2024. There are no doubts that he will win the elections in 2018 because the Kremlin will obtain the results he wants. The election results may not be necessarily falsified. Due to propaganda most Russian citizens support Putin or just don't see any alternatives.

Related articles
Girnius. Is Russia that dangerous?
Russian oppositionists in Vilnius: we want to change Russia, not the tsar

In fact, Russia's Presidential elections will be a kind of spectacle, but any spectacle needs certain special elements. If Vladimir Putin participates in the elections, he should display some pre-election activities. The non-official election campaign in Russia already started and members of Putin's team have encountered problems.

Russian newspaper "Vedomosti" mentioned that spin-doctors in Russia could not "find an image of the future" for Vladimir Putin's presidential campaign. It is not an unexpected problem because Putin ruined all clear future models with the decision to annex Crimea in 2014. The Kremlin demonstrated a lack of respect to the principles of international law. After that the so-called Western World (The European Union, USA etc) made the decision to isolate Russia from the arena of world politics area and attempted to influence Moscow's decisions through economic sanctions.

Russia is in a difficult situation now. On one hand, it has no possibilities to change its relationship with the Western World while Vladimir Putin is in power. The confrontation against West is the basis of current Russian ideology. The anti-western position is also a part Vladimir Putin's image. There are no possibilities to change it in modern authoritarian Russia. The annexation of Crimea also was portrayed as the Kremlin's greatest Victory, so authorities couldn't change their mind and return the peninsula to Ukraine, just as they couldn't stop support for pro-Russian rebels in Ukrainian Donbass region.

In the aforementioned situation, the only possible direction Russia could choose is deeper confrontation against Western World. It's not very practical, but ideologically for the Kremlin it is "right".

When Russia could not find an "image of future", it just tries to manage the past or invent new (but in fact – forgotten) propaganda narratives. Not a long time ago the Russian Ministry of Foreign Affairs attacked NATO in information space concerning a short movie about "forest brothers" the Alliance shared in social networks. Moscow stated that members of the resistance movement in the Baltic States were not fighters for independence but "fascists" and "Nazi collaborators". In fact, this narrative is repeated from Soviet propaganda times.

Another important sign – in the middle of July the leader of pro-Russian rebels in Donbass, head of the so-called "Donetsk people's republic" Alexander Zakharchenko announced the Malorosia project. The aim of the project is... re-establish Ukraine. Of course, there is nothing to discuss from a geopolitical or legal point of view, but this announcement is important for propaganda purposes. "Malorosia" is not a casual name. This was what Ukrainian territories in the Russian Empire were called in the XIX century. So, it seems that where Russia couldn't see a future, she looked to the past. And not only looked, but attempted to manage it in the way the Kremlin needed.

We can predict that deeper confrontation against Western World and aggressive interpretation of the past will be the main narratives for the new Putin election campaign. And we should not wonder. Putin is a person, who in fact stole a clear and stable future from Russia and for the people of the country left only an imaginary past.

Russia couldn't find a future but wants to manage the past