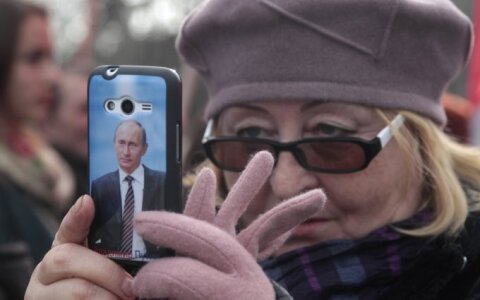 At the same time however it’s a country where the political leaders enjoy an 80 percent popularity rating. More importantly, while indicators showed a drop in voter turnout during recent parliamentary elections, the ruling party achieved an impressive result, wining 30 percent more places and gaining a constitutional majority.

That‘s the contrast and incomprehensibility of today‘s Russia.

Due to low energy prices as well as sanctions applied by the European Union and the United States because of its aggression in Ukraine, Russia is in recession. In 2015 its gross domestic product (GDP) dipped by 3,7 percent with no sign of recovery. Although economists unanimously concede that that the long debated worst-case scenario – a complete economic collapse – has not materialised, and that due to the fact that the Kremlin has taken some necessary measures, long-term prospects for the Russian economy are not encouraging.

It‘s an internal policy of reticence that causes gloomy prospects like this and an unwillingness to act that could harm structural reforms.

According to the World Bank, Russia‘s economy could start to inch up in 2017 when minimum growth is expected. Indicators indicate the same for 2018 suggesting the worst is already over. Representatives of the Bank of Russia cautiously acknowledge that there are good signs but at the same time add that economic recovery will not be rapid with expectation of results being drawn out. While warily positive, news like this is a breath of fresh air for ordinary people whose income has not only fallen but also for those increasingly living below the poverty line and who now number over 21 million.

On the other hand, the same statistical research reveals the fragility of Russia‘s economy. The Kremlin is in actual fact totally dependent on the world oil and gas prices. If we analyse just one factor, that being a 15 percent fluctuation in the oil price, we should see Russia‘s GDP growth varying accordingly by 3,7 percent. In other words, if the price of oil rises by 15 percent, GDP growth is predicted as almost doubling and vice versa. That‘s a sizeable ratio showing the scale of dependency.

There‘s nevertheless no hope of any other scenario. From the start Russia‘s economy was resting on a foundation that restricts potential.

Already at the start, during the transition from a planned to a market economy, fundamental problems arose because chaos reigned, inflation was running wild and non-functioning institutions were powerless to solve anything. As soon as the devious got hold of anything they became oligarchs who gained power. They realised that the continuing situation was in their favour and they saved Boris Yeltsin‘s failing political career; subsidised with loans the state which was on the verge of bankruptcy and in return received the strategic economic sector, especially by controlling the energy sector. The rest had to make do with waiting for better days.

In 2000 when Vladimir Putin took over the helm he stabilised the situation yielding swift results. In the first eight years GDP growth topped a huge 7 percent annual average. Until the global recession, when only in 2008 one tenth of the economy was lost, the country was strengthening, people‘s income was rising and the turmoil of Yeltsin‘s turned to disappointment. Memory fades however. Of course, much of this was brought about not only by sound political decisions but also a by positive changes in the oil price which jumped from 40 to 80 dollars and just before the crisis reached 140 dollars. This increase boosted Russia‘s budget revenue which meant that even ordinary people had a taste of prosperity.

As global economic growth declined, Russia had to contend with returning to a more miserable reality. Although the country returned rather quickly onto a positive trajectory, GDP growth for 2010 – 2014 reached an average of only 3 percent. What‘s more, the guidelines of the new system born of the „good times“, started to become apparent especially due to the fact that the role of the state in the economy increased from 35 to 70 percent. It‘s therefore not hard to say that Russia, although it has taken on the norms of capitalism, has done so by introducing its own version of capitalism, one which maintains the elite that supports oligarchic and political power, while the rest make do with the leftovers.

As Fiona Hill and Cliffor Gaddy write, Vladimir Putin‘s understanding of capitalism is not one of production, management or marketing; it‘s not one of workers and clients. The Russian capitalism is first and foremost the ability to agree on where personal connections, the use of Dutch law or the creation thereof fulfil a core role. Without this element there‘s no question of surviving the system unless you‘re too minor a player.

A system like this becomes very flexible for those who keep making use of it but who at the same time never forget the core principle. For example, The Economist cites the case of Vladimir Yevtshenko, the owner of Sistema, a holding company. Once, Sistema gained control of the shares of Bashneft, an internal oil company. This deal got the go-ahead from the then president, Dimitry Medvedev. But in 2014 Yevtushenko was arrested because he refused to sell the thriving company to another company – Rosneft – the offering price of which did not reflect market realities. After three months of house arrest, Mr. Yevtushenko was released with the accusations against him expunged. Yet soon after that Rosneft acquired the Bashneft shares. Mr. Yevtushenko later thanked Mr. Putin for the decision to release him. So long as Mr. Yevtushenko played according to the rules he could get rich unimpeded. The good life most likely entices one to forget that the rules are not based on the principles of the free market or the unquestionable right of ownership and therein lies the price to pay.

On one hand, principles like this ensure a vertical government stability and some predictability. Those who got rich in the energy or other strategic sectors and the financial sectors are today supporting an overall stability. On the other hand, it anchors the country economically which does not allow for resolution of the actual problem.

There is of course a road to change and a rather easy one at that. For long-term growth and minimal shock to the system especially in the energy commodities market Russia must reduce its dependence on oil and gas which makes up 60 percent of its exports. Innovation, business diversification, attraction of foreign investment should help create alternatives that would increase potential.

It is however difficult for investors to trust a system where you can lose everything in one day by violating written or unwritten laws.

Mr. Putin of course speaks constantly of the need for reforms and modernisation lessening dependence on energy commodities. Even reformer Alexei Kudrin has been commissioned to put together a change plan for the 2018 presidential elections in which the current president hopes to be re-elected for a new six-year term. But can change be made in a system where the greater competition, the greater independence of the judiciary, impartiality in making decisions and the establishment of a strong middle class is a threat to the foundation of the very system?

The Kremlin is capable of adapting relatively smoothly to changing circumstances. Everything however has its price. When the general economic decline began, spurred on not only by falling oil prices but also by sanctions, it became obvious that difficult decisions had to be made.

At the end of this year in the budget changes presented to the Russian parliament, with this trend in mind, 5 billion euro have been allotted to both revenue and expenses. For this reason the official budget deficit will reach the 3,7 percent-mark although Mr. Putin resolutely dogged it in order not to have a repeat of the previous mistakes of „over borrowing“ which tipped the country into a deep hole during the crisis. The areas where the most cuts were made were in investment, health care and education. For example the financing of health care will be cut by one fifth and compared with general budget expenditure it will reach its lowest level since 2006.

Drastic cuts like these could make up for the loss in social welfare which has remained a priority of the government – only for stabilising the public mood. Along with this a portion of the budget, while not publicised at all, increased making up 22 percent. The defence sector was hit a bit but not significantly. Russia will still be a country that allocates 4,7 percent of its GDP to defence. This could in actual fact drop next year to 3,3 percent although it is not possible to pin down an exact figure because of the abovementioned „classified“ portion of the budget. What is good is that this sector will always be on its own especially regarding Russia‘s media rhetoric which stresses the existential threat from the West and the need for defence using all possible means.

These cuts will impact each person living in Russia. 79 percent believe that the economic problems are due to the drop in income and a third of the people are already buying less foodstuffs; another 49 percent say that they‘ve been forced to save on medicines and so don‘t buy the most expensive medicines recommended by their doctors. Almost two thirds say that inflation which recently returned to single-digit figure does in actual fact seem higher that official statistics because purchasing power has fallen.

Savings however will not suffice if it weren‘t for savings accumulated during Russia‘s period of growth. One of the funds allocated for economic systemic problems is diminishing rapidly. If in 2014 it held almost 80 million euro, less than 27 million euro are left. With these funds the budget deficit is plugged however at the rate it‘s going resources could run out next year already.

Despite that, people in will still have to pay for an extremely ambitious expansionist foreign policy. For example, maintenance of the Crimea alone can cost an annual 8 billion Euros not to mention even the continuing conflict in eastern Ukraine. Furthermore, there‘s the military campaign in Syria which costs the Kremlin 100 million euro a month.

With an imaginary victory and an increase in global political influence, as many Western analysts acknowledge, Russia‘s role has become more blatant than before but it‘s one that has its price. And that price lies first of all with the ordinary Russian tax payer. Much of the burden though is generally carried over into the future because one purposes of the funds mentioned was to help resolve the demography of an aging population due to economic woes. It‘s paradoxical that ordinary people themselves who avidly watch state television are inclined to support this initiative (or at least seem to).

Yet one thing is for sure – Russia will not fail. Despite economic woes, in three or four years-time stability should be restored. Moreover, all possible measures are being taken which are in effect now yet which in the future will have long-term negative consequences (not only because of used funds but also because of reduced investments in human capital in terms of education and health care). Together, this exposes Russia‘s essential worries which are not caused by the „evil West“ as the media likes to repeat. Limits to the country‘s growth are encoded in system-related issues that have a political load; and there‘s no reason to hope that that will change in the near future.