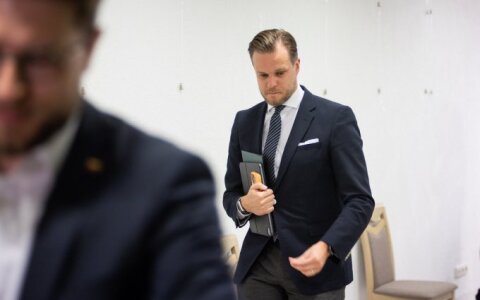 Lithuanian Foreign Minister Gabrielius Landsbergis has called on the international community not to turn away in the face of Vladimir Putin's new war crimes and to hold the aggressor accountable for his actions.

"The permanent member of the Security Council, Russia, is openly threatening security and the rules-based global order – the very cause this Council was created for," he said in New York on Thursday, addressing the UN Security Council on behalf of the Baltic states.

Russia defies the UN principles and has already become "a synonym of brutality, state-run terrorism and genocide", the minister said.

In his words, the traces of Russian brutality found in Izium are so shocking that most people have a natural instinct to turn away, but right now the international community cannot and should not do so.

"Yesterday (Wednesday) we all woke up to one more Putin’s attempt to escalate aggression. By announcing mobilization he now has waged the war against his own people. Against the people, who meant to be the future of the country but are turned into the weapons of colonial past. Sowing fear, blackmailing, manipulating are the very few weapons he has left with. Sowing scare is his only tactics. But we shall fear not. We shall meet Putin’s desperate saber-rattling with calm and resolve," the Lithuanian foreign minister said.

According to Landsbergis, condemnation alone will not end these crimes. And he stressed that international organizations should use all of their resources to bring Russia’s atrocities to light and prevent impunity.

He also paid attention to the fact that Russia’s war against Ukraine has far-reaching consequences across the globe as Ukraine is one of the major exporters of wheat, corn and sunflower oil.

"Thus we shall make it very clear: the shortage of food is due to the Russia’s aggression against Ukraine and due to blockade of the Ukrainian ports. And NOT because of the internationally imposed sanctions," he underlined.