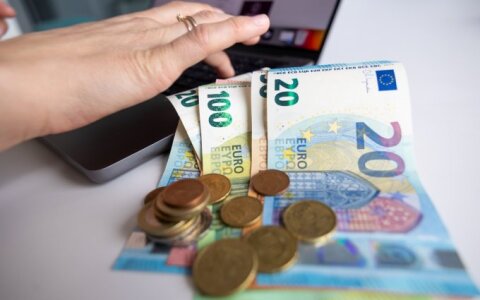 Lithuania’s ministries of finance and social security and labor have proposed to the government to increase the minimum monthly wage by 110 euros, to 840 euros (before tax), and the non-taxable income threshold – by 85 euros, to 625 euros, from January 1, government sources confirmed to BNS on Tuesday.

In this case, the minimum monthly wage would increase by 15 percent, and the tax-exempt income threshold – by almost 16 percent.

The Cabinet will consider the rates of the minimum wage and the non-taxable income, which will be applied from January 1, 2023, during its meeting on Wednesday. However, draft decisions have not been made publicly available so far.

Lithuania's Tripartite Council representing the country's government, employers and employees, last week failed to reach an agreement on raising the minimum monthly wage from next year and will submit different opinions to the government.

Related articles
Lithuanian president warns that budget deficit must not pose risks to state
Gross earnings in whole economy up by 2.9%

Deputy Finance Minister Mindaugas Liutvinskas said at the Council last week that the government would have to make a decision "somewhere in the middle" between 800 and 888 euros.

Prime Minister Ingrida Simonyte earlier said that the aspects that should be considered while negotiating the rate of the minimum wage should include the potential slowdown in the growth of the economy and wages next year.

This year, the non-taxable income rate stands at 540 euros while the pre-tax minimum monthly wage is 730 euros, or 550 euros after tax.