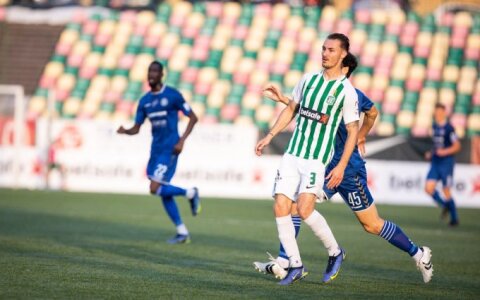 A working group of the Lithuanian Football Federation has proposed amendments to the federation's statutes, including reputational requirements for its executives and a direct role for football club representatives at the federation's conference, the LFF said on Tuesday.

Submitted by the special working group to the LFF member conference, the draft amendments propose to introduce a clause on the need for all elected LFF executives to meet reputational requirements set out in the directives of the international football organizations – FIFA and UEFA.

Also, a possibility should be created for Lithuania's top-level football clubs to directly delegate their representatives to the LFF conference, and for the organization's president and vice presidents, members of the Executive Committee, and members of the Ethics Commission to be elected at the conference.

Under the bill, the LFF conference would get the powers of electing the federation's president, vice presidents and the Executive Committee. The latter currently consists of persons delegated by the LFF members themselves.

Also, persons who have been convicted of a criminal offense could not be members of the LFF governing bodies, the bill proposes.

Moreover, the bill proposes to make national football clubs members of the federation. Currently, they are represented through regional associations.

The LFF says the next meeting of the special working group will take place in person during a visit of FIFA and UEFA experts to Lithuania.

The working group includes LFF representatives and FIFA and UEFA experts and is led by LFF President Tomas Danilevicius.

The executives of the international football organizations are scheduled to visit Lithuania in October and November and meetings with Lithuanian President Gitanas Nauseda, Speaker of the Seimas Viktorija Cmilyte-Nielsen and Prime Minister Ingrida Simonyte are planned, the LFF said.

On Monday, Simonyte sent a letter inviting FIFA and UEFA to work together on the resolution of LFF problems.

Earlier, Nauseda was sceptical about proposals to temporarily introduce direct management of the LFF and said the situation would not change with the adoption of a "football rescue" law, adding that Lithuania could be at risk of being excluded from international competitions.

FIFA and UEFA said the last week that if the Lithuanian Seimas adopted the proposed law on the LFF's temporary direct management, the country's national teams and Lithuanian football clubs would face suspension from FIFA and UEFA-organized tournaments.

Moreover, the LFF could see the suspension of all of its powers as a FIFA and UEFA member, as well as the termination of FIFA and UEFA's financial assistance to Lithuanian football.

In recent years, the LFF has been criticized for poor sports results and some of its officials having links to the criminal world.

Lithuania currently ranks 142nd in the FIFA rankings, which is its worst result ever.