Lithuania loses to France despite a hard fought battle 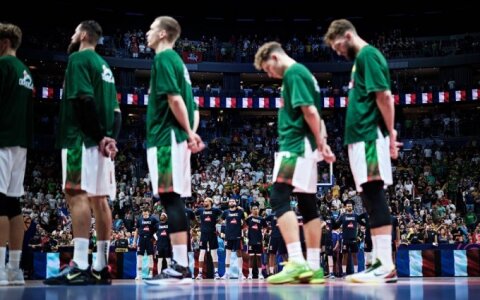 As the smoke cleared at the end of the hard fought war of wills, it occurred to me that I could not remember another time when Lithuania had lost the first two games in a row at a European championship tournament. I have been a die-hard fan much of my life going back to the 1992 ‘Other Dream Team’, which brought home national honor and the bronze medal for the fledgling independent nation in the best possible way, by defeating their former oppressors from Russia.

Lithuania had been a basketball superpower of 3 million people even before they were occupied by the Soviet Union, winning a couple of gold medals as an independent nation in the 1930’s .

All in all, they have brought back nearly a dozen total medals (11 in all), which has been a great source of pride and national cohesion. I know this 0-2 scenario has probably happened before, maybe I just simply forgot, but I just can’t for the life of me remember another time when they lost two in a row like this!

Of course they were put in the infamous group B, the “group of death” and had to face both of the toughest teams other than themselves in game one and two. I wasn’t worried going into the tournament about strength of schedule, I just knew this version of the national team is a solid medal contender and was going to win at least one out of opening two. Sadly, they just didn’t do it though.

I hate to admit this, but I am mad as hell! I know damn well they were capable of winning not one, but both times and were very close at the end of both matches... right up until they blew it both times. Why you ask were we not able to close the deal either time then? This question burned in my mind on the long, lonely 2.5 hour drive from the Grand Duke’s restaurant in the heart of the Lithuanian community in Chicago to my home in Champaign 120 miles south of there. I thought about it over and over as I drove through an endless sea of fully mature 8 foot tall corn stalks. I came up with a couple answers.

JV and Domas need to cease and desist playing together for long periods of time. This is not saying that both of them are not outstanding players, they both are. I’m just saying that coach Maksvytis should understand that when he plays both of the nba studs TOGETHER, they cease being the alpha dogs, the aggressive attackers they are and become the deferential, wishy-washy beta males we witnessed today. The problem with this team is we don’t really have one leader the way Luka Doncic and Evan Fournier clearly are for their respective teams. 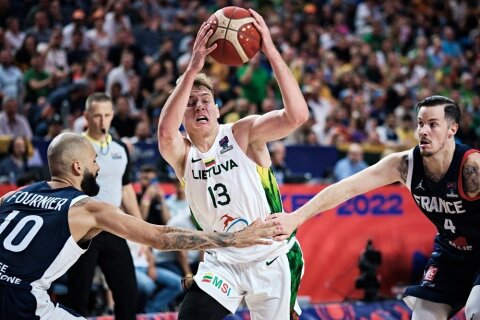 We sort of have this committee thing where JV and Domas are co-captains of the team. Co-Captains who happen to play the exact same position at that.

We should start the game with just one of them at the center spot and have the other one come in off the bench. Every time this has been tried, despite being a surprisingly small sample size, it has been proven to work efficiently. JV got off to an excellent start today with a quick 7 points in the early going, but this happened seemingly at the expense of Domas, who started the game not playing well or just not having any opportunities due to Jonas having the higher usage rate.

Instead of having a fresh Domas come in and give JV a needed rest at the perfect time when he was starting to get tired, both players grew fatigued together. There are many NBA teams that have two excellent centers (a starter and a bench player) but there’s a good reason why good NBA coaches generally don’t ever play both of them together. This is because having two centers slows you way down in the fast-paced, modern game. It also decreases floor spacing as your centers are not typically the best shooters,as is the case with Domas and JV. Also as I stated, if both your centers are your alpha dogs, as is also the case with Domas and JV, that leads to having more than one “rooster in the hen house” so to speak. This means one of them might get going, but that might cost the other one some momentum as was the case today. A friendly word of advice to Coach Maksvytis, just start JV and bring Domas off the bench going forward.

When Rokas is a-rocking don’t bother benching! The bright spot today was the 21 year old point guard for Lithuania, Rokas Jokubaitis. He had an outstanding game and was very effective throughout the contest. The greatest silver lining was imagining how good he’s going to be for LT in a few short years. In the second half, when Lithuania again took a 6 point lead about halfway through the fourth quarter, it was very much due to the great play of the young Jokubaitis. He made several three pointers,then when they overplayed him on the outside shot he did exactly what he was supposed to do and drove to the basket where he dished to JV for a crowd pleasing dunk. I remember sitting in the bar with my Lithuanian fan cohorts cheering the fact that we definitely are set for the future with Rokas at the helm now that Mantas Kalnietis is probably retired, then the next thing I know he got benched inexplicably. It’s almost as though Lithuanian coaches in general punish success. I’m not just picking on Maksvytis,many other Lithuanian coaches have frustrated me in the past pulling players with the hot hand and today was no different. If it ain’t broke, don’t fix it. If Rokas is a-rocking, let him keep rocking. It’s not like a 21 year old is going to struggle with fatigue. By putting in another player, you are messing with the chemistry that is such a delicate thing sometimes. I’ll take a hot player that might be a little tired over an ice cold one who is fresh all day. Coach Maksvytis- STOP MESSING WITH SUCCESS! 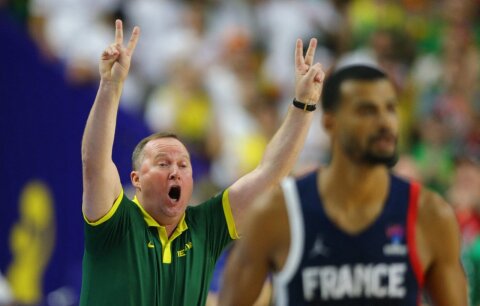 Play Jokubaitis and Lekavicius together! Almost the direct opposite principle from playing JV and Domas, two centers together, is playing two point guards together. Both are excellent ball handlers, both are willing passers, and both are excellent shooters. There’s no reason that late in the game you can’t just keep both point guards in the game if they are both playing well. I remember back in 2019 when the debate was who should close out the game, Lukas Lekavicius or Mantas Kalnietis? Both were point guards, both were playing well at the time, but Lekavicius was the up and comer while Kalnietis was the seasoned veteran. I remember texting then coach, Dainius Adomaitis, who I know, and telling him the exact same thing. Play both of them together.

He never responded to my text but sure enough, the very next game, both Lukas Lekavicius and Mantas Kalnietis finished the game together and Lithuania won due to their stellar play together.

This of course might have something to do with the fact that Mantas Kalnietis is naturally a shooting guard, and it’s easy for him to slide over to the shooting guard role, but I think that it’s deeper than that. A center is naturally a finisher, you want your big man to have the utmost confidence, therefore you don’t play him together with a rival for extended minutes on the team.

You want each big man making an emphatic argument as to why they should be getting the playing time over the other one and acting super aggressively to make their case. A point guard on the other hand is naturally deferential. Their actual job is to pass the ball and get others involved. This is NOT the job of the center unless you’re a special case like Nikola Jokic.

Therefore let their be multiple point guards on the floor at the same time, they increase ball movement and generate better shots and more confidence for your big men. Especially because both of them are excellent shooters and drivers to the basket. If Rokas Jokubaitis and Lukas Lekavicius are both having great games, no need to pick one over the other, especially at the end of the game in crunch time when two hot hands help the team more than one.

Mindaugas Kuzminskas was your top scorer vs Slovenia, why didn’t he play hardly at all in this one? In my humble opinion, Mindaugas Kuzminskas is still one of the top four players on the LT national team. In the last game against Slovenia, he scored 19 points and was undoubtedly the best player on the team. My argument here is an extension of leaving Rokas Jokubaitis in the game when he’s hot. Give a hot player who’s been proven to be successful a consistent role and consistent minutes. Mindaugas, now as the senior member of the team at the ripe old age of 32, has a lot of experience which was definitely lacking today in the rookie mistakes that were made by the younger players. It is quite frustrating to see the haphazard usage of certain players like Kuzminskas, who can and should be a valuable part of this team.

If you’re going to play Eigirdas Žukauskas, use him to shut down Evan Fournier. Having watched Žukauskas get playing time during the early summer tournaments, I came away very impressed with his ability as a defensive stopper. He can also shoot the 3 ball pretty well so he’s not a liability as a defensive-minded stretch 4. His mobility combined with his size, length and his junkyard dog, relentless mentality make him stifling on the defensive end. Having watched Evan Fournier go off for 27 points today, I couldn’t help but think Žukauskas might have been up for this particular defensive assignment. Instead, he came in for one possession at the end of the first half simply to guard the inbound passer. He didn’t appear after that. When the other team has an offensive player of the caliber of Fournier, Žukauskas should be used as a stopper in a glass case.

As a diehard fan of Lithuanian basketball, I just can’t watch us drop another one tomorrow against Germany. I can’t fathom losing 3 in a row and being on the precipice of elimination in group play. True even if they lose tomorrow but win the last two they could still be 4th place in the group and advance to the sweet 16 knockout round, but the last thing I want is for it to come to that.

Let me say this loud and clear, I DON’T believe that we are capable of losing three in a row! I truly feel sorry for Germany, they are in for a proverbial butt whooping at the hands of an extremely motivated Lithuania. If losing is a great motivator, losing twice is an even better one!

If coach Maksvytis can maybe try some unconventional tactics like the ones I outlined in this article, we can get back on track. If not however, the calls to finally bring in Šarūnas Jasikevičius, a creative and unconventional basketball mind who everyone in Lithuanian basketball reveres and respects, will grow louder and louder...

WE REFUSE TO GO OUT LIKE THIS! MES UŽ LIETUVĄ!

Lithuania loses to France despite a hard fought battle