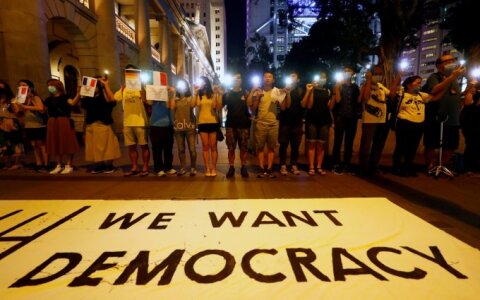 A photo exhibition has been opened at the Lithuanian Seimas on Thursday, reminding of the protests that took place in Hong Kong three years ago and led to an action inspired by the Baltic Way.

Opening the exhibition, Marius Matijosaitis, chairman of the Lithuanian Parliamentary Group on Parliamentary Relations with Hong Kong (People's Republic of China), said that in both Lithuania and in Hong Kong, the people who formed human chains were striving for the same things – democracy, the rule of law, and respect for human rights.

Attending the opening, Iverson Ng, a Hong Kong resident who now lives in Tallinn, said that Lithuania was a special place for him because it had always supported Hong Kong. He was one of the initiators of the human chain in Hong Kong, just like Latvia, Estonia and Lithuania did in 1989, to protest against China's actions,

On August 23, 2019, more than 210,000 Hong Kong residents formed human chains of about 60 km long in total. It was impossible to form a solid chain from the Kowloon Peninsula to Hong Kong Island because Victoria Harbor separates Hong Kong Island from the rest of the territory. However, people in Hong Kong people managed to form a moving human chain from one side of the ferry pier to the other. Also, as it was impossible to stand hand in hand on road, people did so at red traffic lights when the traffic stopped, the man said.