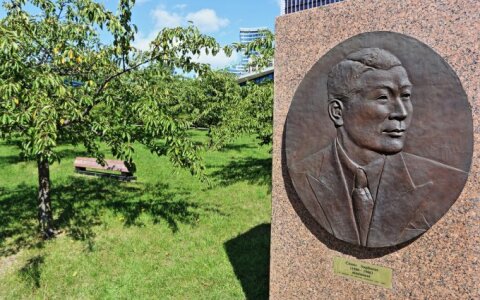 The Lithuanian parliamentary Committee on Foreign Affairs is in favor of helping the foundation of Japanese diplomat Chiune Sugihara who saved thousands of Jews during WW II, with around 150,000 euros needed every year.

On Friday, the Seimas committee got acquainted with a letter from six foreign ambassadors residing in Lithuania to the ministers of culture and education, science and sports, highlighting the importance of Sugihara's legacy for the promotion of democracy, tolerance and humanity.

The letter was sent by the ambassadors of Japan, the US, Israel, Germany, Poland and the Netherlands in response to a request for assistance from the Sugihara Diplomats for Life Foundation. The latter established and is maintaining the Sugihara House-Museum in Kaunas, Lithuania's second-largest city, which is having financial difficulties due to a drop in Japanese tourists.

"The pandemic ruined the whole inflow of people they relied on, and they have never had any state support in the first place, they would need about 150,000 euros a year. It's a small thing, we should really support the memorial house of the most brilliant humanist, the righteous man, Chiune Sugihara," Emanuelis Zingeris, a committee member, said.

Related articles
Righteous Among the Nations honored in Kaunas for saving Jews
Nauseda: relations with Japan improving, but some potential still untapped

Laima Liucija Andrikiene, the committee chair, noted that around 20,000 Japanese tourists would visit the museum every year, but it now "has dropped dramatically, to 1,000 a year".

The committee made a protocol decision on Friday to support the Sugihara Diplomats for Life Foundation to ensure the continuity of its activities, with the government expected to make the final decision on funding.

Dalia Tamosiuniene, an advisor to President Gitanas Nauseda, told the committee that attention to Sugihara's legacy should be constant, not occasional.

"Sugihara's legacy should be given great attention, both political and financial. The Seimas declared 2020 the Sugihara year, and this should not be one-off demonstration of political attention, but a continuous initiative," she said.

Ramunas Janulaitis, head of the Sugihara Diplomats for Life Foundation, told BNS on Thursday the museum's facing difficulties after Japanese tourists, who accounted for the majority of visitors, stopped coming.

In his words, the museum used to receive up to 3,000 visitors a month, with about 85 percent of them being Japanese tourists, before the coronavirus pandemic and Russia's war against Ukraine, and now, the number has dropped to a couple of hundred per month.

The Sugihara Diplomats for Life Foundation was established in 1999 to commemorate the life of Japanese diplomat Sugihara. The foundation later founded the Sugihara House-Museum at the former Japanese consulate in Kaunas, and has been naming the Person of Tolerance of the Year since 2001.

Sugihara was a Japanese military officer and diplomat who served as Japan's consul in Kaunas, Lithuania's then temporary capital, in 1939-1940.

At that time, Kaunas was home to a large number of refugees from Poland, including Jews, who were looking for a way to escape the war when the Red Army occupied the country.

Consul Sugihara asked the Japanese Foreign Ministry several times if he could issue Japanese visas to such refugees. After his requests were denied, the diplomat, on his own responsibility, issued several thousand transit visas for people to travel to third countries via Japan.

Such visas allowed thousands of Jews to reach Japan by train via Siberia. Historians say Sugihara helped some 6 000 Jews escape the Holocaust.