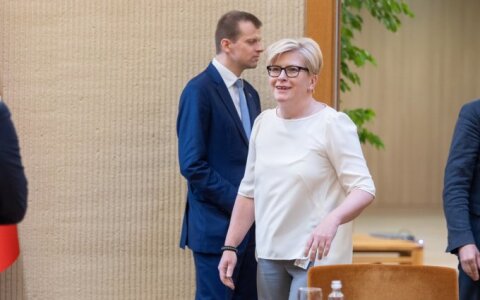 On 2 August, Prime Minister Ingrida Šimonytė received members of the newly elected Board of the Lithuanian World Community (LWC) at the Government office, with whom she discussed issues of importance to the Lithuanian diaspora abroad, said the prime minister’s press service.

“The support of Lithuanian communities abroad for Lithuania at the dawn of the restoration of its independence was invaluable, and the voice of the diaspora was also of crucial importance and influence in supporting our European and Euro-Atlantic integration. Today, the world has changed even more and it allows us to stay in touch, despite all the kilometres that separate us. The support of Lithuanians living abroad for Ukraine proves that those living far away care just as much as those who are here. I am always glad to hear that those who have left do not forget Lithuania, and at the same time, they notice the progress made by the state and society,” said Prime Minister Šimonytė.

At Tuesday's meeting, the formats of cooperation between the Government and the LWC, the issues of organising a referendum on multiple citizenships were smoothly, raised by the Board representatives, as well as the topics of preserving the connection between Lithuanians living abroad and Lithuania and fostering Lithuanian identity were discussed.

The prime minister highlighted the contact maintained during the COVID-19 pandemic as a successful example of cooperation between Lithuanian authorities and the LWC and thanked for the support for the initiative Petys už laisvę (Shoulder for a freedom).

Prime Minister Šimonytė congratulated the members of the newly elected Board of the LWC and wished the Board success in implementing the goals of strengthening Lithuanian identity and mobilising civic solidarity.