Foreign visitor numbers in Lithuanian museums down 70 pct, due partly to war 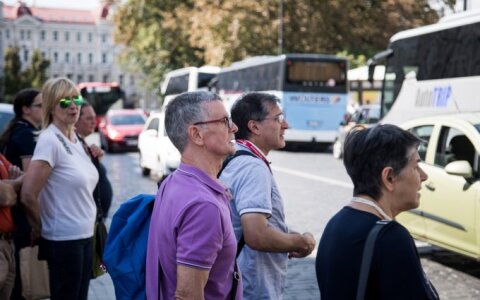 The number of foreign visitors to Lithuanian museums has declined by nearly 70 percent, due partly to Russia's war in Ukraine, Culture Minister Simonas Kairys said on Thursday.

"We have signals that the flow of tourists from foreign countries has dropped by almost 70 per cent," he told the Ziniu Radijas radio station, adding that "we have to wait until the fall to see the true picture."

Kairys admitted that tourist arrivals might have been affected by the feeling of insecurity due to the aggression of Lithuania's neighbor Russia in Ukraine and its rhetoric.

However, the COVID-19 pandemic has already shown that the cultural sector, especially museums, can no longer "live on memories" but must reorient itself to adapt to the new reality, according to the minister.

"Those who embrace the new reality are more likely to be successful. Because both COVID and the war have their impact," he said.

Kairys said Lithuania is working to promote its national culture internationally, citing France's confirmation that it will announce a Lithuanian cultural season in 2024 as an example of this activity.

The minister expects that NATO's Vilnius summit planned for next June will also strengthen the sense of security for tourists.

"These are the topics that send the message that Lithuania is safe," he said.

Thousands of people have been killed and millions have been forced to flee their homes since the start of Russia's invasion of Ukraine on February 24.

The European Union has imposed a series of sanctions on Russia over the war.

Among other things, a ban on the transit of some sanctioned goods from mainland Russia to its Kaliningrad exclave via Lithuania earlier this summer triggered an angry response from Moscow and threats to retaliate.

Foreign visitor numbers in Lithuanian museums down 70 pct, due partly to war