A memorial plaque to Lithuanian writer removed in Russia's Sovetsk 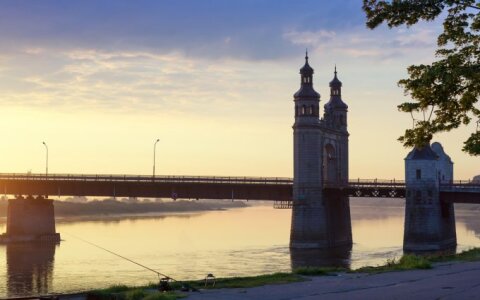 A memorial plaque to Vilhelmas Storosta-Vydunas, a Lithuanian writer and philosopher who lived and worked in Sovetsk, Russia's Kaliningrad region, has been removed, Lithuania's public broadcaster LRT reports on Tuesday.

"Friends have asked for a plaque to Denis Davydov, instead of Vydunas," Yevgeny Makarov, head of the Sovetsk administration, posted on the VKontakte social network, sharing a video of the process.

He also provided a link to a Wikipedia article about Davydov, a leader of the partisan resistance to Napoleon in 1812 and a representative of "hussar poetry".

Responding ironically to the move, Lithuanian Culture Minister Simonas Kairys said "our famous writer, philosopher and humanist, persecuted by the Nazis, has been denazified".

"This way Russia is trying to put him on the same shelf with the "armed" sculptures of the Great Patriotic War. The bas-relief has been removed from the house where Vydunas lived for 11 years," the minister said in his Facebook post.

A participant of the Lithuanian national revival movement, Vydunas was born in 1868 in Lithuania's Silute District. While living in the Lithuanian part of East Prussia, then part of Germany, he wrote more than 30 drama works and lectured on the subject of nationality throughout Lithuania.

A memorial plaque to Lithuanian writer removed in Russia's Sovetsk