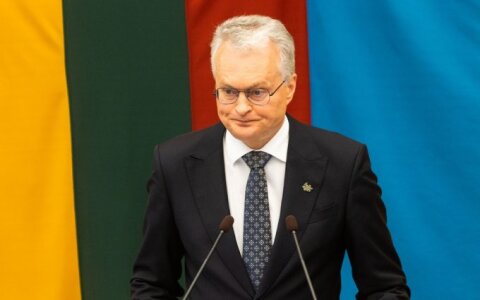 The European Commission will clarify its explanation on the implementation of the restrictions on the transit of EU-sanctioned between mainland Russia and its Kaliningrad region, Lithuanian President Gitanas Nauseda said on Thursday.

"I will meet with the European Commission president at 3.30 p.m., I will see the draft and I do believe that clarification will be published soon. I will not comment on its content because I do not want to comment on the content of documents that have not yet been published and discussed," Nauseda told reporters in Brussels on Thursday after arriving for a meeting of EU leaders.

"I would just like to call it clarification on the transit of goods moving from mainland Russia to the enclave, to the Kaliningrad region. When I see that, then we can talk about it", he added.

Politico, an EU news website, also cited EC spokesman Eric Mamer and undisclosed sources on Thursday as saying that the Commission would issue further guidance on the application of these sanctions, allowing free transit of sanctioned goods.

Nauseda also pointed out that Lithuania was in favor of the fourth sanction package for Russia, approved in March in response to Russia's invasion of Ukraine.

"However, when it comes to the actual practical application of the sanctions, we are talking about the European Commission's responsibility to do so. It is doing so and I believe this will be announced soon", the Lithuanian president said.