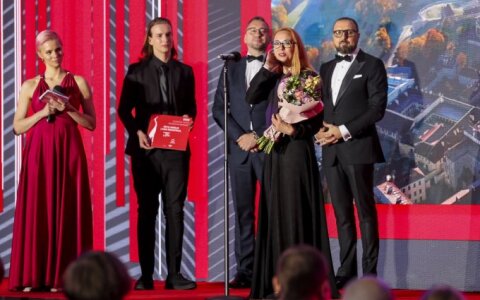 Laurynas Bareisa and his film Pilgrims triumphed at the Silver Crane film awards in Lithuania over the weekend, and Giedrius Kiela and Zygimante Elena Jakstaite were named the best actor and actress.

Five awards were also presented to the team of Algimantas Puipa's film Synephilia.

Kiela won the award for his role in Pilgrims, and Jakstaite received the award as the lead actress in the film Runner.

Mantas Kvedaravicius, the Lithuanian director of the film Mariupol, who was murdered in Ukraine, was awarded a Silver Crane for lifetime achievements. The award was presented by Lithuanian Prime Minister Ingrida Simonyte and announced by Ukrainian President Volodymyr Zelensky.

The award for the Best Documentary went to Giedre Zickyte's Jump, and Jorune Greiciute's It's All Right received the Best Student work.

The most viewed film was Tadas Vidmantas' Night Fishing

The Vilnius Film Office received an award for its contribution to the film industry.

A total of 19 statuettes were handed out during the awards. All in all, 31 films competed, selected by the jury from 58 entries.