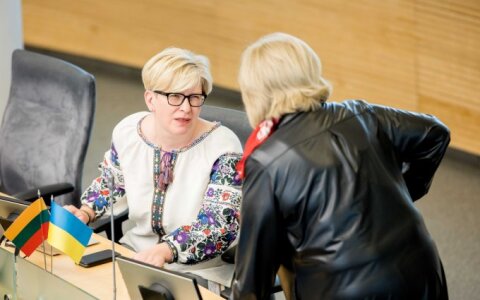 "It encourages us to wear vyshyvankas and thus show solidarity with Ukrainian women and all the people who are now fighting for our European values," Simonyte told reporters at the parliament.

"It is very nice to see that many have done so, and it seems to me that this is a symbolic but supportive gesture," she said.

The prime minister said she had ordered and purchased her vyshyvanka.

"It was difficult, but it was really embroidered by Ukrainians," she said.

The Lithuanian capital last weekend hosted the Vilniushyvanka Ukrainian Days Festival to show solidarity with Ukraine which is fighting against Russia's aggression.

Over 53,000 refugees from Ukraine have arrived in Lithuania since the start of the war. Many of them have settled in Vilnius.