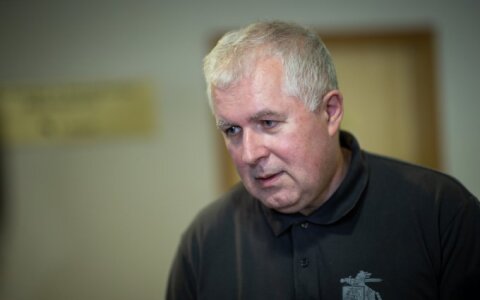 "The synchronization (of acquisitions - BNS) is not such a simple thing. We are trying to synchronize the purchase of multiple rocket launchers with the Baltic countries. Of course, the minister and I talked about the areas where we can develop our joint effort, including the area of coastal defense, and I think we will consider it," Anusauskas told journalists.

"It turns out this weapon is very effective, and the Ukrainians are using it and it is designed for air defense", the Polish minister said, adding that Warsaw is open to the idea of procurement synchronization.

"We can coordinate the purchase of other types of weapons. We are close neighbors, so let's take advantage of the fact that our armed forces use the same or similar weapons", Blaszczak said.

Both Lithuania and Poland see the need to bolster their military capabilities and to hold Russia accountable for the war in Ukraine, Anusauskas said.

The two ministers say they agreed on closer cooperation in the area of cyber security, as well as on transforming NATO's multinational forces into brigades.

"Both Poland and Lithuania view Russia as a long-term threat to the West," the Lithuanian minister said.

"The free world must do everything to stop Russia," the Polish minister said, adding that money spent on military acquisitions is not an expense but a security investment.

Blaszczak also voiced his belief that the existing sanctions for Russia must be tightened.

"These sanctions must be very serious not to allow the Kremlin to rebuild its military potential", he said.

The Polish minister also backed Finland's aspiration to join NATO as it would boost the security of the Baltic states and Poland, limiting Russia's aggressive action and the likelihood of invasion.

Once Finland joins NATO, cooperation between Warsaw and Vilnius on the defense of the Suwalki Corridor should not change, Anusauskas said.

"Looking at the overall picture in the region, the eastern flank is getting stronger in terms of security", he said.

The Lithuanian minister hopes Finland's membership would be taken into account during the preparation of new defense plans for NATO's eastern flank.