Minister: exports to Taiwan make one sixth of ex-exports to China 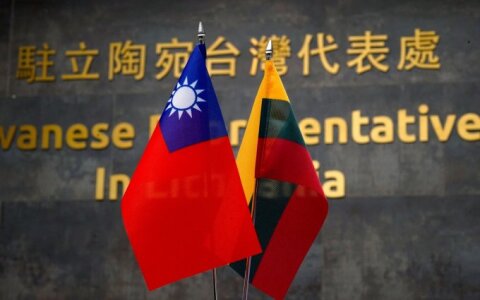 Asian countries are highly interested in trade with Lithuania, Foreign Minister Gabrielius Landsbergis says, adding that exports to Taiwan now make one sixth of Lithuania's former exports to China, while exports to Singapore have almost tripled.

"In my opinion, this is a very good result, given that Taiwan is a country with a population of 20 million, and we have only spent about a year on re-establishing relations with this country," the foreign minister said during the Government Hour in the parliament on Thursday, responding to a question from MP Arturas Skardzius on what Lithuania had managed "to do with Taiwan".

"What have you done to attract investment, what are the exports, what benefits have you been able to gain from cooperation with Taiwan?" he asked the foreign minister.

"I have expectations that we will be able to overtake what we have been building for decades with undemocratic and authoritarian China where our exports stood around 300 million euros. Today, we have almost 50 million euros (of exports – BNS) to Taiwan", Landsbergis said.

He acknowledges the fact that economic and trade relations with Taiwan and other Asian countries were weak in the past.

"Lithuania's name is heard louder than ever in Asia and interest in trade relations is as strong as ever," the minister added.

Minister: exports to Taiwan make one sixth of ex-exports to China