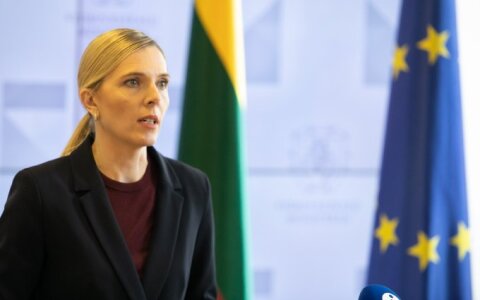 Lithuania is looking into the possibility of sending deminers to Ukraine at the country's request and already has one specialist working there, Interior Minister Agne Bilotaite said on Thursday.

"[A lack of] deminers is a problem that Ukraine's interior minister has asked us to help solve and involve the EU in dealing with it," the minister told the Ziniu Radijas radio station.

"More than half of Ukrainian territory is currently in one or another state of having mines or explosives left behind [by Russian forces], so it is necessary to increase the capacity," she said.

According to Bilotaite, Ukraine has over 500 deminers, but it needs more to be able to neutralize explosives as quickly as possible while they are still visible through vegetation.

"We have sent one deminer as part of our team of investigators, but we are now looking into our internal resources [to send more]," she said.

Related articles
Seimas recognizes Russian actions in Ukraine as genocide
Ukrainian parliament vice-speaker in Vilnius: Ukrainians are fighting for freedom of all Europe

Bilotaite and her Latvian, Estonian and Polish counterparts are planning to ask France, which currently holds the EU's rotating presidency, to coordinate the deployment of demining specialists to Ukraine through a network of police agencies.

"We have drafted a joint letter [...] to the European Commission and the French presidency to coordinate this process," the Lithuanian minister told the radio station.

"We are pressed for time, because the images [...] of Russians leaving explosives in children's cribs and toys in their homes are simply terrible," she added.

A team of Lithuanian officers has arrived in Ukraine to investigate possible war crimes.

"The team of investigators has the expertise that Ukraine has asked for," Bilotaite said.

The minister said the plan is to rotate teams of investigators, adding that this important for gathering evidence and then delivering justice.

All three Baltic countries have sent such teams to Ukraine, and Bilotaite hopes that other Western countries will do so as well.