Lithuania to keep military patrols on some Belarus border sections 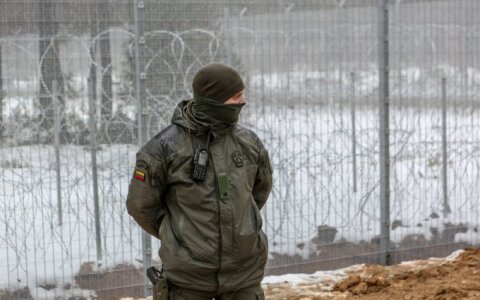 Amid a decrease in illegal migration flows, Lithuania's interior and defense ministers agreed on Wednesday to keep military patrols only on border sections where irregular migrants still try to cross in from Belarus.

"There is military personnel in border areas. As we saw a gradual decrease in the number of illegal border crossings, troops were not present at some border sections. Now they will only be present at the closed ones [...], where [crossings by] groups of irregular migrants still occur," Defense Minister Arvydas Anusauskas told reporters.

Troops will continue to be deployed at the risky sections of the Varena frontier district, from Kapciamiestis to Dieveniskes, but will be withdrawn from border sections north of Dieveniskes, toward Adutiskis, according to the minister.

According to Interior Minister Agne Bilotaite, the assistance of the Armed Forces is necessary for the protection of the state border while Lithuania is under a state of emergency due to the security situation in the region.

"The threats on the border with Belarus have not disappeared and have not changed. The Belarusian regime continues its efforts to destabilize the political and public order in neighboring countries, and a new route for illegal migration through Russia has emerged as well," she said.

Anusauskas did not say how many troops would be pulled out of border areas.

Troops have been assisting border guards since last July when Lithuania declared an extreme situation due to an influx of irregular migrants from Belarus.

The Interior Ministry says many migrants travel from their countries of origin through Russia to Belarus and then on to Lithuania.

Lithuanian border guards have turned 1,613 irregular migrants back to Belarus so far this year after preventing over 8,000 illegal crossings from the neighboring country last year. These numbers include repeated attempts by the same people to cross the border.

Lithuania to keep military patrols on some Belarus border sections