Ukrainian parliament vice-speaker in Vilnius: Ukrainians are fighting for freedom of all Europe 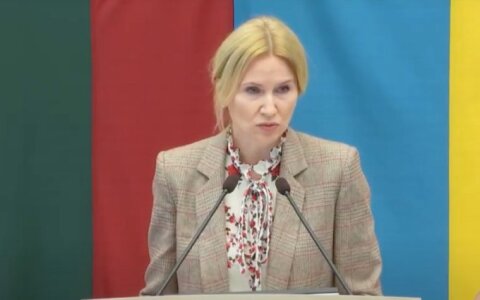 Ukrainians are fighting for the freedom of Europe as a whole, Olena Kondratiuk, deputy speaker of Ukraine's Verkhovna Rada, told the Lithuanian parliament on Tuesday.

"Today, Ukrainians are fighting not only for their land, for their freedom, but for the freedom of the whole of Europe. The truth is that February 24 has changed Europe forever and we need to rebuild our common European security policy," she said, referring to the date on which Russia launched its invasion of Ukraine.

Kondratiuk addressed the Lithuanian parliament in Ukrainian, which she expects to become an official EU language "soon".

"It is a special honor to address the people of Lithuania [...] in the Ukrainian language which Russia's aggression wants to [...] eradicate along with the Ukrainian people," she said.

"And this is why I want more people in Europe and in the world to know, hear and respect the Ukrainian language, which will soon become one of the official languages of the European Union."

The vice-speaker thanked Viktorija Cmilyte-Nielsen, the speaker of the Lithuanian parliament, for her trip to Kyiv in late March, noting that "it was one of the first such high-level visits after the invasion".

"On February 24, like millions of Ukrainians, I woke up to explosions. I remember how my colleagues felt the risks of a Russian invasion, but we – peaceful people with a European mindset – had hope as we did not believe that the neighboring country could do such a crazy thing," Kondratiuk said.

"Speaking in the Ukrainian parliament, Mrs. Viktorija said that this happened because the West did not stop Russia in 2014, but must do so now," she added.

The vice-speaker of the Verkhovna Rada is the highest-level Ukrainian official to visit Lithuania since the start of the war.

The Lithuanian parliament was addressed via a video link by Ukrainian President Volodymyr Zelensky on April 12 and by Ruslan Stefanchuk, the speaker of the Verkhovna Rada, on March 10.

As part of her visit, Kondratiuk has met with Cmilyte-Nielsen and other MPs, and is scheduled to meet with other politicians.

Ukrainian parliament vice-speaker in Vilnius: Ukrainians are fighting for freedom of all Europe