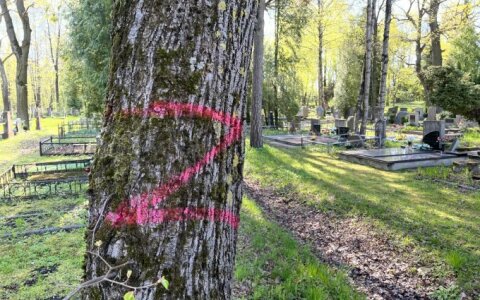 Russia's war symbol, the "Z" letter, being used in Ukraine appeared on trees at the Soldiers' Cemetery in the Sanciai area of Kaunas, Lithuania's second-largest city.

The signs were reported to local police on Monday morning, said Odeta Vaitkeviciene, a spokeswoman for Kaunas District police.

The so-called Victory Day is celebrated in Russia on May 9, and incidents are feared in Lithuania this year, therefore, there is a reinforced police presence at the sites of Soviet graves.

"Our officers are now at the scene, looking into the circumstances," the police representative said, noting that it's the only such incident reported on Monday.

According to the Department of Cultural Heritage, the Soldiers' Cemetery in the Aukstieji Sanciai area was established in 1891 for the soldiers of the Russian army's Kaunas garrison. The cemetery was abandoned during WWI and the burial of Lithuanian soldiers started in a separate plot around 1922.

In 1941, after the German-Russian war broke out, Wehrmacht soldiers were buried in the eastern part of the cemetery.

In 1944, the burial of Soviet soldiers began in the northern part of the cemetery.