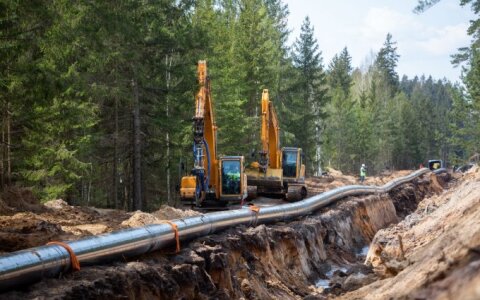 Gas Interconnection Poland-Lithuania (GIPL), a gas pipeline connecting Lithuania and Poland and one of the past decade's key strategic projects, was launched at 12.40 p.m. on Sunday, May 1.

The GIPL's official opening ceremony will take place in Lithuania on May 5, attended by the Lithuanian, Polish and Latvian presidents, the EU energy commissioner and the Baltic and Polish ministers.

Completed in Lithuania early this year, the 508-km GIPL gas pipeline connected Lithuania, the other Baltic countries and Finland's gas market with the European Union. The pipeline stretches 165 km in Lithuania and 343 km in Poland.

The GIPL project was implemented by Amber Grid together with the Polish gas transmission system operator Gaz-System. The steel pipes for the pipeline in Lithuania were supplied by Polish company Izostal for 26.4 million euros, excluding VAT, and the pipeline was by Alvora together with Siauliu Dujotiekio Statyba for around 80 million euros.