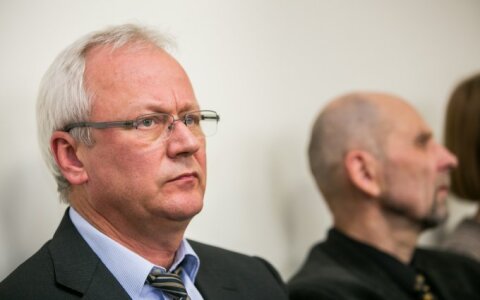 Vidmantas Bezaras, director of the Lithuanian Cultural Heritage Department, hopes that removing Soviet monuments from cemeteries will not turn into "a mass campaign" or become "a matter of fashion".

Hs comment came after Culture Minister Simonas Kairys had signed a decree giving leeway for municipalities to decide on Soviet heritage at cemeteries.

"I do hope this will not be a mass campaign and a matter of fashion," Bezaras told the parliamentary Committee on Culture on Wednesday. "With great respect to the buried, many of whom probably did not understand what they were fighting for and were often shot in the back or killed because of the bad command, something we see in Ukraine now."

"We have to maintain our respect and tell the whole world: we are a nation that does not fight the dead, but those symbols that promote both the current regime and the former one do not satisfy us as a nation," he said.

A total of 160 burial sites are recorded in the registers and about half of them have Soviet monuments. However, there may be around 200 more, either marking the burial places of Soviet soldiers or erected in tribute to them, according to Bezaras.

Graves to remain under protection

The director emphasized that cemeteries, graves and other burial sites would not lose the protection guaranteed by the Geneva Convention.

According to him, Soviet monuments include "noteworthy works of art" that show little or no signs of propaganda, but most of them were cast according to standard models created between 1948 and 1950, and some were erected in places where there was an active resistance against the Soviet regime, such as in Merkine, and are offensive to local people.

Some monuments could be left in place with additional information, Bezaras said.

The director referred to a military cemetery in Kaunas' Sanciai district as an example.

"There are probably many options. If the pedestal with the kneeling soldiers said, 'Forgive us for the war in Ukraine', the ideological message would probably be stronger than simply taking it down and throwing it away", he said.