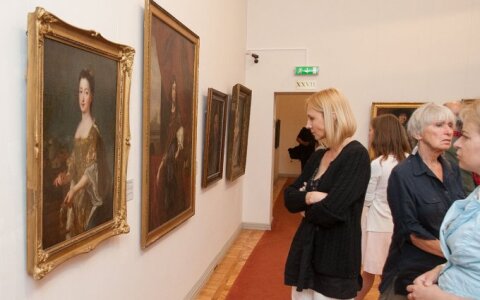 The Lithuanian National Museum of Art has launched an initiative to raise funds to buy packaging materials and other items needed to preserve Ukraine's museum treasures during the war.

Arunas Gelunas, the national museum's director, told BNS on Thursday that the fundraising has already begun in cooperation with the Jonas Karolis Chodkevicius Charity and Support Foundation, adding that the money will be initially sent to the National Art Museum of Ukraine in Kyiv.

Next week, the Lithuanian museum will run special tours, including of the Old Arsenal's rarely-opened cellars that will host an exhibition, named "Icons on Ammunition Boxes", by Ukraine's artists Sofia Atlantova and Oleksandr Klymenko.

"No doubt, saving people is the top priority," Gelunas, who will lead the first tour, told BNS. "But our fellow museum workers have stayed in their institutions; apparently, some of them, because all the staff cannot stay during the war."

"It is a huge challenge for them to preserve cultural assets in different Ukrainian cities," he added.

However, the Ukrainians decided to move some of the exhibitions and the most valuable works to basements and bunkers, fearing that that might be destroyed in an attack by the Russian army during transportation.

But these basements and bunkers "do not have the usual climatic conditions of conventional exhibitions or drier premises on the ground", Gelunas said.

Therefore, storing museum treasures there requires "special packing materials, special polythene, special non-combustible fabrics, plywood for boxes, and finally fire extinguishers in case of fire, as well as folders for works on paper, prints, drawings and photographs", according to him.