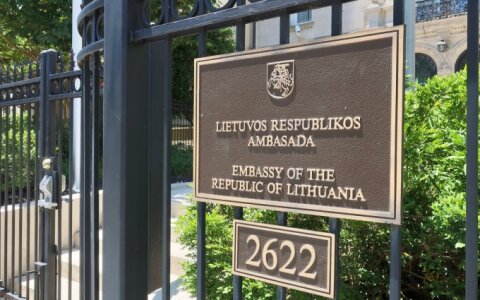 The minister attended a meeting with members of the opposition Social Democratic Party of Lithuania's political group in the Seimas on Thursday and the group's member Algirdas Sysas asked the minister whether the process of appointing ambassadors was not stalling.

Landsbergis said "the process to a large extend is not stalling", adding, however, that in the future the goal would be to have the process of appointing ambassadors better spaced out in time: for example, for the Foreign Ministry to announce competitions to fill vacant position for the upcoming yeas in the summer, then to start the coordination process in the fall and to have new appointments by the end of the year.

"Last year, in September, we announced such a competition for the 12 positions opening up this year. Some of them are vacant, some ambassadors have returned and continue working, they have not been recalled yet but their recall is planned this year. We have a competition done for 12 places and 12 candidates have been selected and presented to the president. As far as I know, the president, due to his businesses, has not managed to meet with all of them but the process is there. When that will be completed, we have been asking practically every week as we are very much interested in the completion of that as soon as possible and for that not to be stalled, I hope," Landsbergis said.

In Lithuania, ambassadors are appointed by the president upon the government's nomination and approval of the parliamentary Committee on Foreign Affairs.

The presidential press service later sent a comment to BNS, stating that the president has already started meeting with selected candidates for ambassadors and has already approved two candidates.

"The head of state will meet with all other candidates shortly. The terms of the ambassadors they would replace expire in the summer and fall," presidential adviser Ridas Jasiulonis said in the response.

Meanwhile, speaking with reporters in Brussels about the EU ambassador issue, the president said he was ready to speak with the Foreign Ministry about candidates for Lithuania's ambassador to the EU and wanted more flexibility.

"I am also ready to speak about those candidates I proposed, as well as those presented to me. But one cannot say that 'either the way we want, or no way then'. We don’t make decisions that way. I want to state that very clearly for the other side to hear it," he said.

The position of Lithuania's EU ambassador has been vacant since August, 2020 when Jovita Neliupsiene's term expired.

In Lithuania, ambassadors are appointed by the president upon the government's nomination and approval of the parliamentary Committee on Foreign Affairs.