Intermin: Lithuania to switch back to emergency mechanism in case of changes on its border 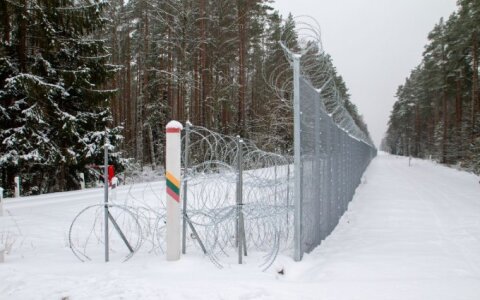 Lithuania will swiftly switch back to a state of emergency mechanism in case of changes in the situation on its border with Belarus, Interior Minister Agne Bilotaite has said.

Faced with an unprecedented influx of migrants, Lithuania declared a state of emergency on its border with Belarus on November 10, 2021 and later extended it to midnight January 14.

On Wednesday, the Seimas is discussing the government’s proposal to extend military patrols on the border with Belarus for another three months until May 13.

The current mandate, which is set to expire on February 13, allows military personnel, like border guards, to give mandatory orders, search people and detain those suspected of violating the law, etc.

According to the government, more than 1,000 troops are currently deployed to assist the State Border Guard Service in carrying out its border protection tasks.

Border guards say more than 4,200 irregular crossed into Lithuania from Belarus illegally last year and over 8,100 others have been turned around since last August.

Lithuania and other Western countries accuse the Minsk regime of orchestrating the unprecedented migration influx, calling it "hybrid aggression".

Intermin: Lithuania to switch back to emergency mechanism in case of changes on its border