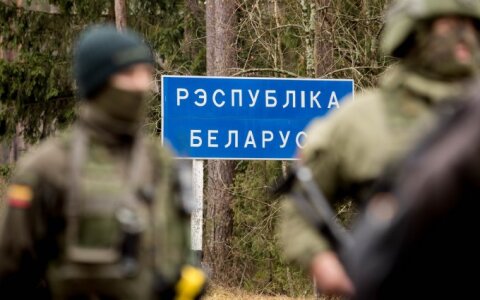 Frontex's Fundamental Rights Office (FRO), which has carried out a monitoring of the situation of migrants on the Lithuanian-Belarusian border, plans to recommend that Vilnius substantially change its policy of pushing irregular migrants back, the Delfi online news site reported on Tuesday.

According to the report, the FRO has gathered evidence of collective expulsions by Lithuanian border guards, a practice that runs counter to international law and the European Convention on Human Rights.

Fundamental rights officers say that the current system where migrants caught attempting to cross the border at non-designated places are advised to claim asylum at an official border checkpoint does not work in practice.

The draft recommendations prepared by the FRO recommend that Lithuanian officers should not send irregular migrants back to Belarus, but instead take them to border checkpoints where they could legally apply for asylum.

The office also says that Lithuania does not have a functioning system for identifying vulnerable persons. It is particularly worrying that there may be people with severe diseases, parents with young children, elderly people, pregnant women, and victims of human trafficking among migrants pushed back to Belarus.

No plans to change rules

The Lithuanian Interior Ministry said on Tuesday that had received Frontex's recommendations.

The ministry notes that the recommendations are not binding, but it plans to take some of them into account.

Among other things, the ministry underlines in its statement that Lithuania is facing a migrant crisis artificially created by the Minsk regime waging a "hybrid attack against the European Union by instrumentalizing migrants".

The ministry also says that Lithuania and its policies are supported by NATO and the EU.

"Until this artificially induced situation of illegal migration subsidies, Lithuania does not see any possibility to fundamentally change the current response measures at the border with Belarus," Deputy Interior Minister Arnoldas Abramavicius said in the statement.

"We will continue our policy of denying entry to irregular migrants at least until the physical barrier is in place and the entire border is controlled by modern video surveillance equipment," he said.

Based on the experience gained in managing the migrant crisis, the ministry is working on concrete proposals for amendments to the Schengen Borders Code and the European Pact on Migration and Asylum.

Lithuanian border guards say they have turned around over 8,000 people since early August, when they were given the right to deny entry to irregular migrants. However, the number may include repeated attempts by the same people to cross the border.

More than 4,200 irregular migrants have crossed into Lithuania from Belarus illegally so far this year. Lithuania and other Western countries accuse the Minsk regime of orchestrating the unprecedented migration influx, calling it "hybrid aggression".

Lithuania has declared a state of emergency along its border with Belarus until mid-January.