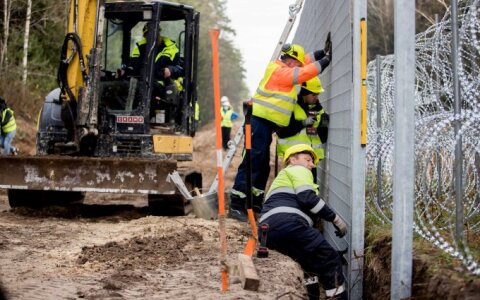 Lithuania's engineering solutions company Telekonta has won a contract worth almost 5 million euros to install a border surveillance system along the Adutiskis frontier section of Lithuania's border with Belarus.

The State Border Guard Service (SBGS) signed the contract, worth 4.953 million euros, not including VAT, with Telekonta on December 2, according to the central public procurement portal.

The work is due to be completed within a year, but the contract may be extended until the end of 2024.

The SBGS had earmarked 5.31 million euros for this project, excluding VAT.

The system will have to continuously detect, record and monitor people and objects crossing or approaching the state border under any weather conditions and send data to a stationary control center.

Adutiskis is one of the three most vulnerable frontier sections along more than 100 kilometers of the border with Belarus, where the first phase of a border barrier construction project is underway.

The installation of concertina wire in the Adutiskis section is nearing completion, with a fence expected to be erected there by the end of April next year.

Lithuania decided to erect the physical barrier along its border with Belarus earlier this year amid a surge in irregular migration from the neighboring country.