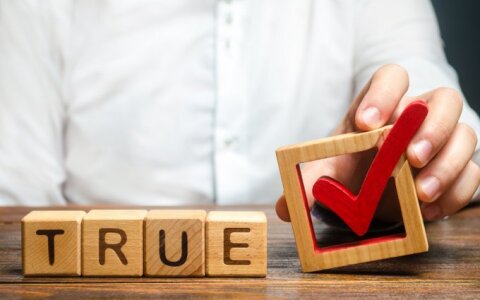 As the EU statistics service, Eurostat, reported last week that the share of people who verify online information in Lithuania is the lowest among EU member countries, the country's media experts are calling on the country's government to focus more on educating people on a critical way of thinking.

In 2021, 47 percent of all people aged 16-74 years in the EU saw untrue or doubtful information on news websites or social media during the 3 months prior to the survey, compared to 38 percent in Lithuania.

However, only around a quarter (23 percent) of people verified the truthfulness of the information or content. In Lithuania, this share stood at 11 percent and was the lowest.

"Verification needs effort. And that needs moving forward and having a critical way of thinking, Professor Aukse Balcutiene, head of the public communication department at Vytautas Magnus University, told BNS.

She says the Eurostat figures show the majority of people's critical way of thinking is not ambitious and they are not self-rigorous. Moreover, she says, information verification is characteristic of a slow way of life, and people now are on the opposite way to a fast life.

Meanwhile, Nerijus Maliukevicius of the Institute of International Relations and Political Science at Vilnius University says "the skill of verifying information is not inborn but can be developed". He believes people should be taught this from an early age.

"A state policy is undoubtedly important here. We need a strategy for that, with visible effort to develop people as critical personalities," Balcytiene says.

Maliukevicius also agrees that it’s "a political will issue" aimed at adapting to an evolving environment.

"And it has to do not only with some Russian disinformation, but it also has to do with the information environment when all types of crimes are committed on social media, as well as financial manipulations take place," Maliukevicius said.

The share of people aged 16-74 years old who verified information found on online news sites or social media in the previous 3 months was largest in the Netherlands (45 percent), followed by Luxembourg (41 percent) and Ireland (39 percent).