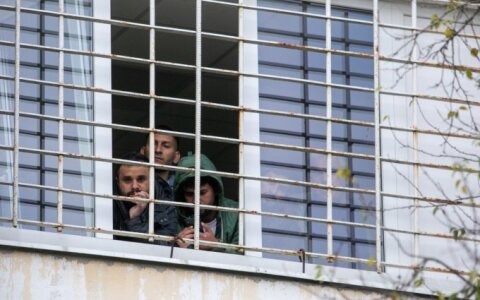 Seventy irregular Iraqi migrants want to return from Lithuania to their country of origin, the Interior Ministry said on Friday.

Deputy Interior Minister Arnoldas Abramavicius has discussed possibilities for accelerating the return of Iraqi migrants with officials from the Iraqi Ministry of Migration and Displaced, it said in a press release.

"We appreciate the cooperation of the Iraqi government in issuing documents to Iraqi citizens wishing to return," the vice-minister was quoted as saying.

"Iraq's repatriation flights from Minsk and, of course, the suspension of flights from Iraq to Minsk back in the summer have also contributed significantly to the stabilization of the situation on the Lithuanian-Belarusian border," he added.

Lithuania has granted only four of around 2,500 asylum claims submitted by Iraqi citizens so far this year.

Some 300 Iraqis have returned home voluntarily and about 2,000 more are facing repatriation.

Each migrant who voluntarily opts to go back to their country of origin receives 1,000 euros, along with a plane ticket home.

The government has increased the cash incentive for the period between December 8 and January 20, from 300 euros previously, in an effort to encourage more migrants to return voluntarily.

Iraqi consuls are visiting Lithuania this week, for the fourth time, to help migrants with their travel documents.

The Iraqi officials said their main objective is to persuade their citizens to return voluntarily and not to use illegal channels to enter the EU. They also underlined the need to strengthen measures to combat the smuggling of migrants, according to the press release.