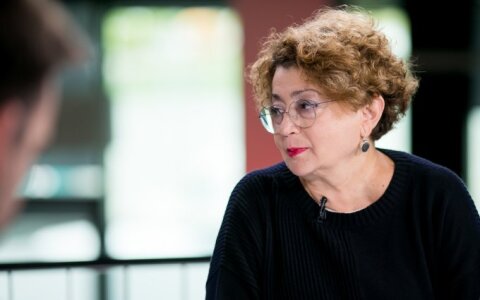 JCL is also "astonished and disturbed" by announcements by the spokesperson of the Chinese Foreign Ministry, as if Jews and other ethnic minorities of Lithuania are suffering here in Lithuania from "serious discrimination" etc.

"Lithuania is a democratic country that respects its Jewish citizens and treats all its citizens equally. We might have different opinions about our heritage destroyed by the German Nazis and their local collaborators during WWII, but we are a part of the free Lithuanian society which offers a free expression of opinion, an open dialogue and pluralism," JCL chairwoman Fainy Kukliansky said.

"Although there is an ongoing open and free dispute between the Jewish community and the Lithuanian authorities regarding the commemoration of the past and other open issues deriving from the Holocaust, we absolutely reject any accusation as if Jews in Lithuania suffer any discrimination today whatsoever," she said.

The Jewish community also urged China to ensure the rights of its ethnic minorities.

"We wish minorities in China had such liberties, human rights, and sympathy as we have here in Lithuania. We call on the Chinese government not to misuse the memory of the Holocaust in the current political debate with Lithuania as such actions violate the living memory of all victims of the Holocaust," the JCL statement reads.

It comes in response to a tweet by Lijian Zhao, spokesman for the Chinese Foreign Ministry, in which he said: "In #Lithuania, there was once massacre of Jews in history. Today, racism remains a grave problem in the country, with Jews and other ethnic minorities suffering serious discrimination".

"Children’s rights are gravely violated as well," he added.