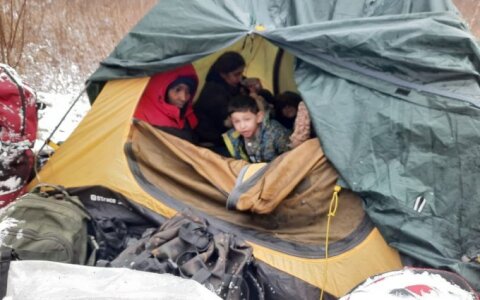 Two Iraqi families detained in Lithuania on Tuesday refused to fly back to their country of origin and returned to Belarus on Wednesday afternoon, the State Border Guard Service (SBGS) said.

The two families declined the border guards' offer to return to Iraq voluntarily by plane from Lithuania with the help of international organizations, it said.

The families were among 14 irregular migrants who were found in Varena District, some 300 meters from the Belarusian border, on Tuesday and were taken to a nearby frontier station where they were provided with food and could warm themselves up and rest.

Twelve of the 12 migrants had Iraqi documents. The other two, both women, said they were Somali nationals.

Among the Iraqi nationals, there were two married couples with three minor children each, and two single men.

As soon as the group were taken to the frontier station, the border guards called in medics and child protection specialists.

The SBGS said its officers answered all questions asked by the migrants and informed the two Somali women and the two single Iraqis that they cannot be allowed into Lithuania and must return to Belarus, the country from which they illegally crossed the border.

The two families were offered the opportunity to take a flight from Lithuania to Iraq, but they "declined the offer", according to the SBGS.

"After weighing the information they were given and talking it over with each other, the migrants decided to return to Belarus voluntarily, together with the minors", which they did in the afternoon, according to the statement.