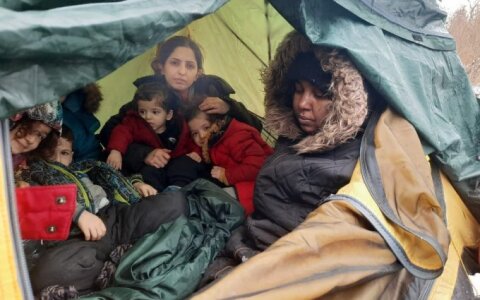 The group was detained some 300 meters from the border at around 1.30 p.m., Giedrius Misutis, spokesman for Lithuania's State Border Guard Service, told BNS.

"Four men, four women and six minors were detained. They are being taken or have already been taken to the nearby Aleksandras Barauskas Frontier Station for the evaluation and all procedures," he said.

Two of the detained persons claimed to be Somalis, and the remaining were Iraqi citizens, Misutis said.

According to Misutis, medics have been called in to evaluate the health state of these migrants. He could not say whether the detained persons would be returned to Belarus, adding that every case is considered individually.

"As always, they will be fed, allowed to warm up and rest. At the same time we will be looking into the border-crossing circumstances as we will calmly, without any rush, look into the circumstances and then some decisions on their legal status will be made," the SBGS spokesman said.

Asked about any health issues the migrants complained about, Misutis said a bit later that a mother and her daughter were taken to an Alytus hospital, but he could not provide more information on their state of health.

"Those remaining at the frontier station have no complaints. They are eating, getting warm, and we are talking to them," Misutis said.

Some 25 migrants are also still living in container houses within the territory of the Barauskas Frontier Station. Misutis says proper living conditions for migrants are ensured there.