Valentinavicius. Lithuania of prohibitions and restrictions - towards soft authoritarianism? 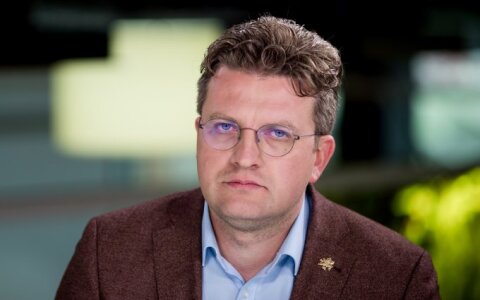 Experts in various fields note that people tend to use multiple forms of coercion in the absence of arguments. This is observed in many areas of life, and state governance is no exception.

By engaging in violence and repression against the media and civil society, autocratic regimes seek to intimidate, silence and destroy so that in democratic societies cherished a dialogue with the public would not be maintained, and authoritarian regimes can govern the country as they wish. Democracies have started managing the Covid-19 pandemic, and Lithuania has also managed irregular migration by declaring a state of emergency, supposedly to address the crisis quickly and effectively, for which almost all measures are acceptable, even those that restrict human rights and freedoms in one way or another. A dialogue with the public is referred to in scientific literature as the principle of involving civil society in decision-making - one of the most important in democracies; therefore, its protection is enshrined in various conventions and the Constitution of the Republic of Lithuania through respect for freedom of expression, the right to freedom of assembly, guaranteeing the right to criticize the authorities, and other principles of respect for human rights enshrined in the Conventions and the Constitution.

However, Fareed Zakaria, a prominent scholar and researcher in his 1997 article in the magazine Foreign Affairs, warned that elections could be recognized as democratic in some countries. However, the principles enshrined in liberal democracies could still be disregarded: as pluralism, the rights and freedoms of the individual, the rule of law, checks and balances. Such countries include democracies, or as F. Zakaria points out, illiberal democracies such as Hungary and Poland, which some Hungarian scholars refer to as “soft autocracies.” Regarding liberal democracy as a failed system, illiberal democracies reject the fundamental values of the European Union (EU), offering them various alternatives, including a return to traditional values, without immigration, homosexuals, and reproductive rights. As scholars Steven Levitsky and Daniel Zibatt point out, democracies still die not from tanks or generals but democratically elected governments, namely, among others, such as Hungary, Poland, Georgia, Ukraine, and Turkey. Noting also that even the EU cannot be proud of the progress of democracy, as only 12 EU countries are recognized as full democracies and even 16 as flawed, according to the 2019 Democracy Index. Interestingly, according to this index, the number of full-fledged democracies in the EU fell further in 2020. According to the 2020 Democracy Index, only nine EU countries are recognized as full democracies, 18 as flawed.

In the wake of the Covid-19 coronavirus pandemic, democracies, including Lithuania, have recklessly juggled the powers provided for in special laws that empower national governments to recklessly restrict citizens’ rights and freedoms, abandoning the need for democratic dialogue between authorities and ignoring the need for a review of the proportionality of restrictions, a necessity of limitations for a democratic society, often using autocratic means to solve problems. According to Umut Korkut, a DEMOS researcher at the University of Glasgow, the behaviour of Hungarian Prime Minister Viktor Orban in managing the coronavirus pandemic reveals how political leaders are exploiting crises to strengthen leadership and gain more power while in government.

Caught by irregular migration, organised by Belarus’s de facto leader Lukashenko over the EU sanctions, Lithuania, Latvia, and Poland, reacted almost identically by imposing a state of emergency that allowed governments to manage the so-called crisis faster and allegedly more efficiently without any concerns about the proportionality of measures exerted of which proportionality and effectiveness no one dared to question. Those who dared the political actors, using political power, influence and place of action (parliament, ministries, etc.) in constructing the chauvinistic discourse, demonized and equated them almost to the collaborators of the Belarusian regime, thus silencing and downplaying them. As Reinhart Koselleck points out, “In politics, words and their usage are more important than any other weapon”, so, according to Heino Nyyssonen and Jussi Metsala, we take speeches seriously, sometimes literally, linking and contextualizing their content with external factors.

The European Commission for Democracy through Law (Venice Commission) notes that the proper functioning of democratic institutions, such as balance and relations between the different branches of power, respect for the rule of law, the protection of fundamental rights, etc., cannot be separated from democracy, and, therefore, the exercise of the right to vote may be a sufficient criterion to define illiberal democracy but too narrow to define constitutional democracy. Scholars Nyyssonen and Metsala believe that the concept of illiberal democracy applies to countries that still adhere to forms and rituals of democracy, such as elections, but whose actual practice is free and fair elections, respect for civil and political rights, and perhaps most importantly, the rule of law is questionable. Thus, the efforts of the Lithuanian Parliament or Government to restrict constitutional rights by weakening or limiting the functioning of democratic institutions under the guise of a state of emergency are characteristic of illiberal democracies (soft authoritarianism) rather than constitutional democracies.

In Lithuania, adherence to democratic forms and rituals became particularly pronounced with the onset of the Covid-19 coronavirus pandemic and the increase in migrant flows from Belarus to Lithuania, when the parliament became a more ritual democratic institution that works “for the sake of the eyes”, hastily organizing facade processes to approve government decisions than a genuinely objective and efficient democratic institution. For example, the government’s amendment to the Law on the Legal Status of Aliens, which recklessly restricted migrants’ rights, has passed all parliamentary legislative processes in the Seimas in almost one day, mimicking the principles of democratic institutions operating in authoritarian states such as Turkey and Russia. One of the most striking examples of democratic forms and observance of rituals is the declared but non-realistic and effective respect for media freedom, the work of which has been restricted by the government or its subordinate institutions, allegedly for reasons of national security and indeed because of the possibility of “working peacefully”, as this is how democratic institutions are viewed in illiberal democracies.

Finally, in democracies, respect for civil society and strong opposition in parliament is another example of the real and effective functioning of democratic institutions, not ritual and facade. Still, in Lithuania, as in other illiberal democracies, civil society and non-governmental organizations are pushed to the margins of decision-making and the opposition is allowed to work as much as is convenient for the ruling majority.

Valentinavicius. Lithuania of prohibitions and restrictions - towards soft authoritarianism?