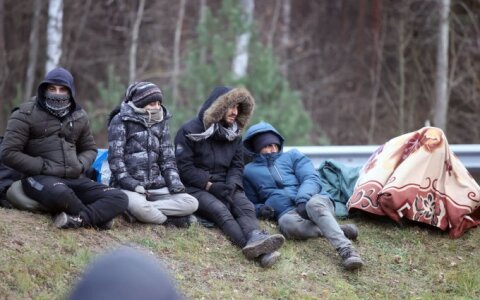 Lithuania's Migration Department has decided not to grant asylum to 26 Afghans yet but they will be issued temporary humanitarian residence permits.

"Due to the uncertain and unstable situation in Afghanistan, repatriations to Afghanistan have been suspended. Until the situation is resolved, we do not return Afghans. This is why we are issuing temporary humanitarian residence permits to Afghans who have not been granted asylum," Evelina Gudzinskaite, director of the Migration Department, told BNS, adding that Afghans who have not been granted asylum also have the right to appeal the Migration Department's decision.

Humanitarian residence permits will be valid for one year, Gudzinskaite said, and "after a year, asylum requests will have to be resubmitted and we will look into whether the basis to extend that permit still exists".

The fact that Lithuania was suspending the return of illegal migrants from Afghanistan indefinitely was in September announced by Foreign Minister Gabrielius Landsbergis.

The Migration Department has received a total of around 100 asylum requests from Afghans.

Asta Astrauskiene, the lawyer for the Afghan migrants mentioned in the ECHR case, told BNS the five Afghans have not been granted asylum yet but their requests are still being processed,

In early September, the European Court of Human Rights (ECHR) introduced interim measures introduced in the case of the five Afghan migrants against Lithuania, temporarily barring Lithuania from sending them out of the country.

The court then said the applicants were Afghanistan citizens and they had arrived in Belarus in August and had since been repeatedly attempting to enter Lithuania to seek international protection.

The migrants were detained soon after the ruling. Lithuania's State Border Guards Service says they came from Belarus and then were pushed back. In the middle of September, border guards detained them again but this time they were allowed to lodge asylum requests.

Lithuanian border guards say there are also several people in Lithuania who claim to be Afghans but have not asked for asylum in the country yet. The State Border Guard Service is now trying to identify them.

"We expect to receive this information over the next several months and then we will make a decision," Giedrius Misutis, spokesman for the SBGS, told BNS.

Over 4,100 migrants, from Middle Eastern and African countries, have crossed into Lithuania from Belarus illegally so far this year. Vilnius accuses the Minsk regime of orchestrating the unprecedented migration influx, calling it "hybrid aggression".