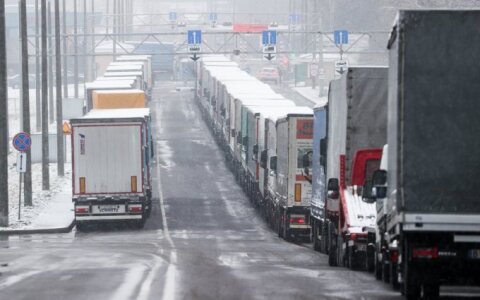 "We've seen cases when people are making attempts to enter Lithuania in trucks. Therefore, a decision has been made to step up and expand vehicle controls," the minister told journalists in Kapciamiestis, Lazdijai District, southern Lithuania on Friday.

"If we see that those tendencies are going upwards, we will definitely seriously consider closing border checkpoints," she added.

Four Iraqis were found inside a truck that entered Lithuania from Belarus on Thursday. The truck was stopped at the Medininkai border checkpoint afternoon, Giedrius Misutis, spokesman for Lithuania's State Border Guard Service, told BNS.

Almost 4,200 irregular migrants have crossed into Lithuania from Belarus illegally so far this year, and the country has also prevented over 7,400 migrants from entering since early August when it introduced its push-back policy.

Earlier this month, Lithuania declared a one-month state of emergency on its frontier with Belarus after thousands of migrants gathered on the Belarus side of the border with Poland and made attempts to force their way into the EU.