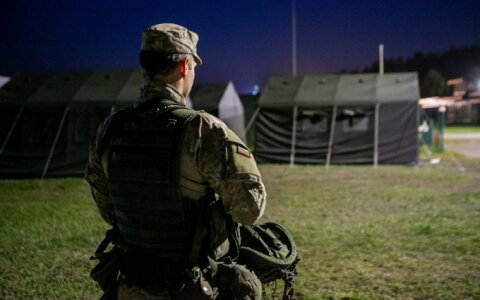 "The mission will end but Frontex will stay in Lithuania," he told BNS. "We have in essence agreed with the Frontex director and the agency itself on the extension of the operation but under a different format. That would be the context of a normal operation, such operations are organized at the EU's almost all borders."

Nevertheless, he underlined, the intensity of the new operation "will be slightly lower" compared to the Rapid Border Intervention that is set to expire on Tuesday.

"There will be no gap between those two operations" as forces will rotate in Lithuania, Liubajevas said.

"We will have a schedule to ensure a gradual exit and entry to ensure there's no gap between the missions," Liubajevas said.

The ongoing Frontex-coordinated operation involved over 100 border guards, the SBGS chief said. Moreover, some 50 officers, including Polish and Estonians, have helped to protect the border under bilateral agreements with Lithuania.

Almost 4,200 irregular migrants have crossed into Lithuania from Belarus illegally so far this year.

Earlier this month, Lithuania declared a one-month state of emergency on its frontier with Belarus after thousands of migrants gathered on the Belarus side of the border with Poland and made attempts to force their way into the EU.