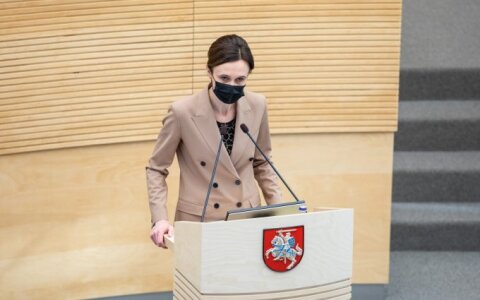 Viktorija Cmilyte-Nielsen, the speaker of the Lithuanian parliament, on Thursday invited people to join 16 Days of Activism Against Gender-Based Violence, an international campaign to end violence against women and girls.

"Almost every day in Lithuania we hear about cases of violence against women; unfortunately, tragic stories ending in death are still being reported," Cmilyte-Nielsen said in a press release. "Last year, there were over 58,000 reports of domestic violence and the vast majority of the victims were women."

The speaker noted that many cases of physical, psychological, sexual and economic violence remain unreported.

"We must ensure that such violence is recognized and that victims are not afraid to speak out and are not blamed," she said.

According to Cmilyte-Nielsen, ratification of the Istanbul Convention would show that Lithuania has become a mature country.

The speaker said earlier in the autumn that ratification of the Istanbul Convention should only be put up for debate in the parliament when there are enough votes in favor.

Dalia Grybauskaite, a former Lithuanian president, submitted the convention to the Seimas for ratification years ago, but the process has stalled due to political disagreements on certain clauses of the document.

Experts from the Council of Europe say Lithuania could benefit from advice on curbing domestic violence.

The Catholic Church and some politicians say, however, that the Convention could lead Lithuania to change its concept of gender and introduce unacceptable provisions on homosexuality.