Border guards turn away 106 migrants on border with Belarus 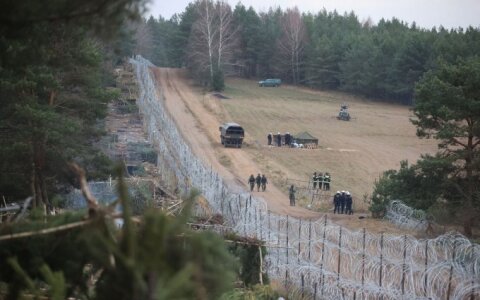 No irregular migrants were allowed into Lithuania on humanitarian grounds on Thursday, it said in a press release, adding that border guards and troops assisting them had not used their service guns in the past 24 hours.

Two signal flares were fired on the Belarusian side of the border, one at Salcininkai District in the morning and the other at Varena Distinct in the evening.

Sporadic shots were heard in the neighboring country near Druskininkai Municipality from around midday until late afternoon. A shot was also fired near Lazdijai District in the afternoon, followed by three more in the evening.

Another 7,146 have been turned away since early August when border guards were given the right not to allow foreign nationals attempting to enter Lithuania at non-designated places.

Lithuania last week declared a one-month state of emergency on its frontier with Belarus after several thousand migrants gathered on the Belarus side of the border with Poland and made attempts to force their way into the EU.

Border guards turn away 106 migrants on border with Belarus