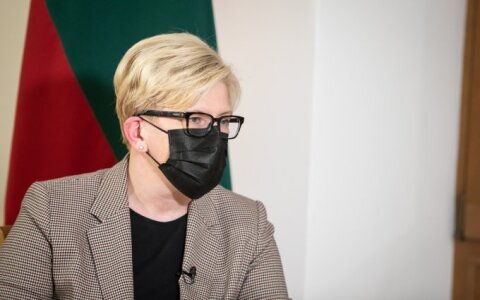 Prime Minister Ingrida Simonyte has said she does not think that Lithuania's foreign policy towards Belarus is changing but warned against giving "additional trump cards" to Alexander Lukashenko.

The prime minister was commenting on President Gitanas Nauseda’s statement that speaking with the authoritarian leader could be a way of solving the illegal migration crisis on Belarus' borders with Poland and Lithuania.

"I don't think Lithuania's foreign policy is changing, but it's important not to give additional trump cards to figures like Mr Lukashenko in such circumstances," Simonyte told the Delfi online news site on Wednesday. "I see attempts to take them [trump cards."

"As to whether the European Union will be able to remain united in its assessments, as it has been so far, I do hope that it will and that this will not mean that we can talk about some negotiations with people who are blackmailing the EU and trying to achieve their recognition", she added.

"I think there are possibilities to solve the crisis by also appealing to Mr Lukashenko like [German Chancellor] Angela Merkel recently did," Nauseda told the BBC on Tuesday. "We have to talk with the man who is responsible for what is happening here at the border."

In the interview, which came after the outgoing chancellor's first phone call to the Belarusian strongman, the Lithuanian leader said that such conversations were not legitimizing him as president.