Officers find cigarettes worth EUR 2 mln in truck from Latvia 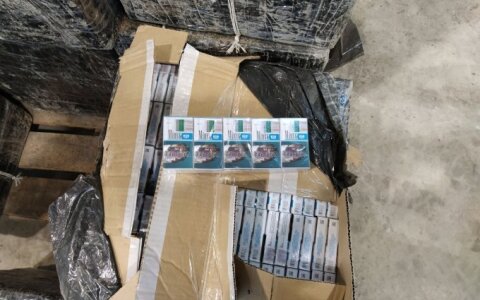 Lithuanian customs officers have this week found a stash of contraband cigarettes, worth almost 2 million euros, in a truck driving from Latvia to the Czech Republic.

There were 1,100 boxes, or 550,000 packs, of Magnat cigarettes in the truck driven by a Latvian national, making it one of the biggest contraband cigarette seizures in Lithuania so far this year, the Customs said in a press release on Wednesday.

The Scania truck was pulled over at a filling station near Marijampole, in southern Lithuania, on Monday evening. The driver said he was transporting stationery from Latvia to the Czech Republic.

The seized cigarettes are valued at 1.96 million euros, including taxes, according to the press release.

A pre-trial investigation was opened. The truck and the illegal cargo were seized and the driver was detained for 48 hours pending a decision on a measure of restraint.

With an increasing volume of smuggled cigarettes being seized at Lithuania's border with Belarus, smugglers are trying other routes for smuggling in illegal Belarusian cigarettes, including from Latvia, the Customs said.

Officers find cigarettes worth EUR 2 mln in truck from Latvia