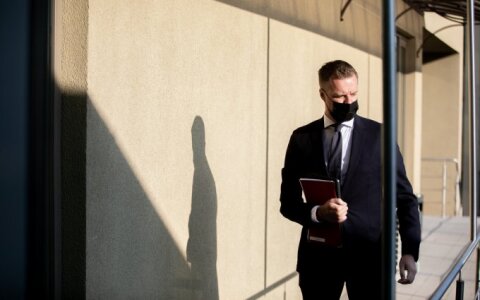 We need to make Minsk Airport a no-flight and also to make sure no planes with illegal migrants land there, Lithuanian Foreign Minister Gabrielius Landsbergis said upon his arrival at a meeting of EU foreign ministers.

"The most important issue for us is the situation near the Lithuanian, Polish and Belarusian border. Today we will have a debate on that and everybody is focused on the question of sanctions, but I will have to go broader than this, basically what we are looking at is to make Minsk airport a no-flight zone. At least for the time being we need to assure that no planes which would be potentially bringing in people with the intention to migrate, to cross the border illegally, they wouldn't land in Minsk or actually any Belarusian airport," Landsbergis said.

EU foreign ministers are set on Monday to decide on new sanctions for Belarus for fueling the migrant crisis near its borders with Poland, Lithuania and Latvia. Ministers are expected to approve sanctions for air carriers, travel agencies and officers linked to migrant trafficking to Belarus, EU foreign policy chief Josep Borrell said on the eve of the meeting.

Related articles
Vice Minister: if needed, EU could impose more sanctions on Belarus
President: we're getting ready for all scenarios

The Lithuanian foreign minister also underlined the importance of creating conditions for illegal migrants to return to their countries of origin by opening a humanitarian corridor.

"The second thing we need to talk about is how do we provide a safe passage to the people who are already in Belarus for them to go back home. It's also very crucial, we need to work with international institutions such as the United Nations and others in order to bring people back. If we manage to secure a safe passage, the Lithuanian government would be ready to assist in providing technical support for people going back home," Landsbergis said.

In his words, in addition to sanctions, we need to talk about the legal accountability of the people who contributed to human trafficking near the EU's external border.

"Thirdly we need to discuss not only the sanctions bus also the future of the Belarusian regime. When sanctions wear out, we need to talk about legal consequences for the people of the regime who participated in bringing all the people to Belarus and causing so much human tragedy on the border of Poland and Belarus and the Lithuanian-Belarus border," he said.

Tensions in EU member states bordering Belarus, lasting for the past several months, rose further last week when several thousand migrants massed the Belarusian-Polish border and some of them tried to force their way into Poland.

Fearing a similar scenario, Lithuania declared a state of emergency at the Belarusian border and in migrant camps.

Over 4,200 illegal migrants have come to Lithuanian so far this year. Lithuania and other Western countries say Belarus is fueling the migrant inflow in revenge for the existing sanctions that were imposed for its crackdown on the opposition, calling it the Minsk regime's hybrid attack.