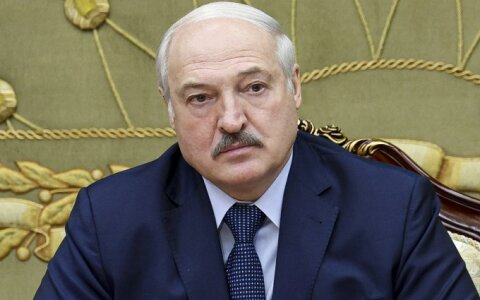 As the European Union gears up for imposing sanctions for Belarus for orchestrating illegal migrations flows to the European Union, the EU is also ready for even more restrictions, if Minsk's behavior does not change, Lithuania's Foreign Vice Minister Arnoldas Pranckevicius says.

"There's the existing principle that if the Lukashenko regime does not change its criminal regime, sanctions will be further expanded and imposed gradually. Naturally, the agreement will have to be reached on every solution again, but, with no doubt, the risk of tougher sanctions that could have an impact on the Belarusian economy or its access to financial markets, it exists and that is an additional measure of pressure on the Belarusian regime," Pranckevicius told the national radio LRT on Monday.

EU foreign ministers are set on Monday to decide on new sanctions for Belarus for fueling the migrant crisis near its borders with Poland, Lithuania and Latvia. Ministers are expected to approve sanctions for air carriers, travel agencies and officers linked to migrant trafficking to Belarus, EU foreign policy chief Josep Borrell said on the eve of the meeting.

Pranckevicius says there are "around 30 subjects" on the initial list ministers are set to discuss on Monday, and sanctions could come into force over this week.

The vice minister also underlined that the decisions by Iraqi and Turkish airlines to cancel flights to Minsk or not to sell tickets for flights to Minsk to Iraqis and Yemenis were important and were also " a proof that sanctions start working and airlines start changing their actions, fearing consequences".

Tensions in EU member states bordering Belarus, lasting for the past several months, rose further last week when several thousand migrants massed the Belarusian-Polish border and some of them tried to force their way into Poland.

Fearing a similar scenario, Lithuania declared a state of emergency at the Belarusian border and in migrant camps.

Over 4,200 illegal migrants have come to Lithuanian so far this year. Lithuania and other Western countries say Belarus is fueling the migrant inflow in revenge for the existing sanctions that were imposed for its crackdown on the opposition, calling it the Minsk regime's hybrid attack.