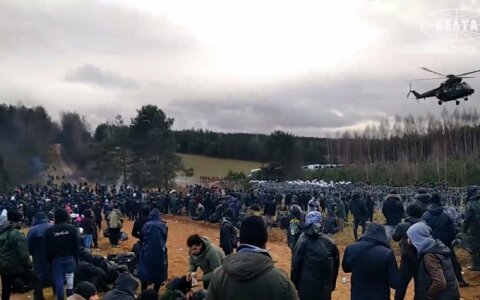 Lithuania's Interior Ministry has proposed declaring an emergency situation in Lithuania near the border with Belarus due to a large number of migrants near the Belarusian-Polish border, Interior Minister Agne Bilotaite told a press conference on Monday.

„In response to this really serous situation, the Interior Ministry's proposal is to declare an emergency situation. The government is set to discuss this proposal and make decisions," the minister told journalists.

The proposal is to declare an emergency situation in the border area, not in the whole of the country.

"We are watching what's going on the Polish-Belarusian border and, of course, it means that we can also expect similar incursions and attacks, therefore, our all institutions are fully ready. Meaning that our maximum officer forces, army forces are now being redeployed based on certain specifics. Our institutions are drawing up various possible scenarios and possible corresponding tactics," the minister said.

Polish officer reported about hundreds of migrants approaching the country's border from the Belarusian side.

Rustamas Liubajevas, commander of the State Border Guard Service, says officers have information that unrest might be organized at illegal migrant camps in Lithuania. Therefore, additional forces and special equipment are being involved, and possible unrest organizers have been identified and subjected to preventive measures.

Liubajevas does not rule out that migrants' action on Lithuanian and Polish border might be coordinated.

"Our institutions started preparing for possible incursions three weeks ago as soon as information emerged about such events on the Polish-Belarusian border. We coordinated our actions with the Lithuanian army and other institutions, including the Lithuanian police and the Public Security Service," the SBGS chief said.

In his words, additional forces are today being deployed to Lithuania's border areas where migrants might potentially break through into Lithuania's territory.

Liubajevas also said that, based on Polish officers' information, Belarusian border guards are blocking a border checkpoint as groups of illegal migrants are being diverted to the border with Poland.

The SBGS commander refrained from providing information on how much of extra Lithuanian forces are being deployed and where, stating that barbed wire concertina has already been installed in some of those sections.

"We don’t have information on large groups of illegal migrants near our border," he said, adding that truck drivers returning to Lithuania from Belarus have not seen such groups either.

"If attempts to break trough are made and there's a threat to the health of lives of our officers, special measures and weapons can be used under Lithuanian laws," he said.

Polish officers reported on Monday that a large number of migrants have been spotted near the border on the Belarusian side, planning to break through into Poland "en masse".