Remains discovered during the renovation of Vilnius University 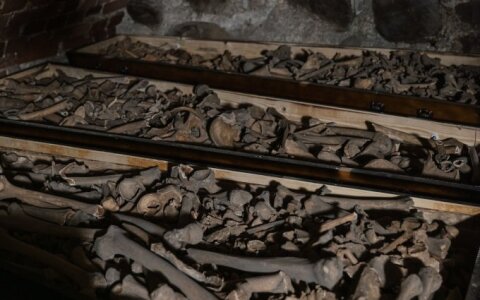 Exactly a year ago, in the autumn of 2020, during the renovation of the northern wall of the Church of St. Johns of Vilnius University (VU), the remains of over 140 people were discovered in the Konstantinas Sirvydas Courtyard. Dr. Justina Kozakaitė, a researcher at the VU Faculty of Medicine, and Rūta Brindzaitė, a doctoral student, conducted a comprehensive anthropological examination and determined the gender and age of 96 individuals, 15 of whom were still children.

“The examination also revealed diseases that the dead suffered from, discovered exceptional injuries, such as multiple healed head injuries or fatal injuries, or a case of successful surgical intervention - healed foot amputation, etc. Examinations like this one help determine not only medical but also historical facts,” the doctoral student Rūta Brindzaitė said.

Answering the question of how and why the human remains ended up at the Church of St. Johns courtyard also required knowledge of its history. Ever since the church was built at the turn of the 14th and 15th centuries, people have been buried in its basements. Interestingly, at that time, it was such a common practice that the crypts of the church became the place for eternal rest not only for the clergy or patrons of the church but also the prominent townspeople. After the establishment of the church, the Brotherhood of St. John the Baptist was established. Its members were well-known townspeople who had to take care of the maintenance of the parish church. Vilnius goldsmiths, tailors, and surgeons soon established their chapels by the parish church. As a result, prominent townspeople were also buried in the basements. An old tradition led to the crypts of the church being dedicated to burials. Therefore, almost every church both in Lithuania and in Europe has chapels with basements where the bodies of their founders rest. The Church of St. Johns was in a similar situation even after the overcrowded basements were cleared at the turn of the 16th and 17th centuries. The memorial plaques with epitaphs in the Piasecki and Ogiński chapels of the church once again testify that the founders of these chapels were buried in the basements. And under the Mary of Loreto altar is a mausoleum of Jonas Liutauras Chreptavičius family women.

An abundance of burials took place at the church. Finally, during the reconstruction of the Church of St. Johns, organized in the 1930s, all the remains lying in the basements were placed in one larger basement, filled with soil and burnt lime, and bricked. The university administration then agreed to this, arguing that open remains could lead to an epidemic. The further history of the burial is unknown. It is also unknown when the said remains ended up in the K. Sirvydas Courtyard.

According to witnesses, the dead were moved here from the church basements during the Soviet era, during the reconstruction of VU in the 1980s. This explanation is plausible as the remains were found destroyed and under a rather thin layer of soil.

“Constructions or reconstructions of buildings in Lithuania frequently discover the remains of people from ancient times but there is no generally accepted procedure indicating what to do with them next, how to take care of them with respect. This is usually taken care of by various communities and church parishes on their own initiative. Vilnius University decided to properly bury the remains discovered during the renovation in the basements of the Church of St. Johns, as it is likely where they were moved from. We hope the university’s gesture will become an example of respectful treatment of the historical remains of the dead found in Lithuania,” said Head of VU Museum Monika Ramonaitė.

The honoring and reburial ceremony will take place on 9 November at 6 PM at the Church of St. Johns during the All Saints’ Mass for the members of the VU community who passed away and the people who donated their bodies to science.

Remains discovered during the renovation of Vilnius University