President's aide: Karoblis would agree to work as ambassador to EU 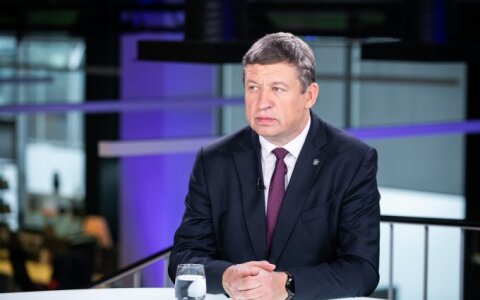 Raimundas Karoblis, a diplomat and former defense minister, would agree to be nominated as a candidate for the post of Lithuania's ambassador to the European Union, an advisor to President Gitanas Nauseda said on Thursday.

"Yes, I have spoken [with Karoblis], and the candidate would certainly be willing to take on this honorable mission," Asta Skaisgiryte, the president's chief foreign policy adviser, told LRT Radio.

Nauseda said on Wednesday that he was ready to "seriously consider" Karoblis as a candidate for the ambassadorial job.

At the start of the year, the president said that he would not appoint either Karoblis or Linas Linkevicius, the foreign minister in the previous Cabinet, as ambassadors to Washington and Brussels, because they needed a "political cooling-off" period.

Skaisgiryte says the period has now passed for both ex-ministers.

"When the foreign minister proposed Karoblis as a candidate almost a year ago, immediately after the [parliamentary] election, nobody had any objections to his candidacy in a professional sense: he was a former minister, but he was also a diplomat who had worked in various positions, and there was no doubt about his competence," the advisor told LRT Radio.

"What was questioned was whether, having just represented the Defense Ministry in the Farmers and Greens' government, he could be appointed immediately, without any transition, to the new Cabinet," Skaisgiryte said.

"This was unacceptable and the president suggested waiting a little while. Now, a year on, [...] the president says he would be prepared to consider his candidacy if the government proposed it," she added.

The post of Lithuania's ambassador to the EU has been vacant since the term of Jovita Neliupsiene ended in August 2020. Ambassador Simonas Satunas is now serving as the country's acting permanent representative to the EU.

President's aide: Karoblis would agree to work as ambassador to EU