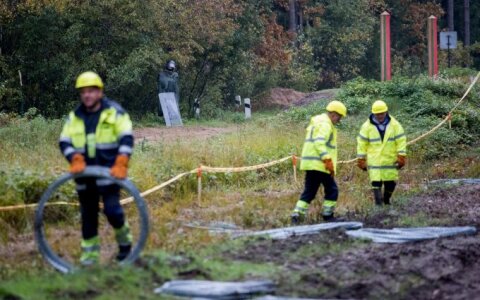 The first segments of a 4-meter-high fence have been installed near Lithuania's southern city of Druskininkai on the Lithuanian-Belarusian border, the Lithuanian government said on Wednesday.

Tetas, a company that is part of the state-owned EPSO-G group, has started installing the segments in key sections where concertina barbed wire has already been installed.

On Wednesday, EPSO-G representatives briefed the special government commission supervising the project and led by Prime Minister Ingrida Simonyte on the progress of the ongoing works.

Produced in Poland and the Netherlands under the technical requirements of Lithuania's State Border Guard Service, fence segments and concertina will be delivered to a border section of around 100 km in November and December.

According to the government, as preparations for the project's second stage are underway (the second stage will involve the construction of the physical barrier on a section of around 400 km), procurement procedures are already in progress, EPSO-G says, adding that offers have been received from 12 suppliers.

The second stage of the construction works will be split into four parts, with 7 to 10 suppliers vying for the implementation of each of them. The offers are now under consideration, and the selected companies will be invited for negotiations. The procurement procedures are scheduled to be completed by the end of November.

Almost 4,200 irregular migrants have crossed into Lithuania from Belarus illegally so far this year, and some 5,000 foreigners prevented from entering Lithuania since August 2 when Lithuania introduced push-backs.

Vilnius accuses the Minsk regime of orchestrating the unprecedented migration influx, calling it "hybrid aggression". In response to the attack, Lithuania has an extreme situation in place and is building a physical barrier on its border with Belarus.