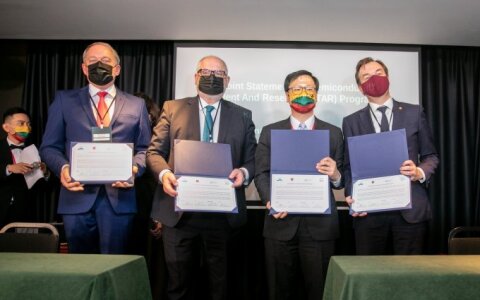 Taiwan's Minister of National Development Kung Ming-hsin said on Wednesday Taiwan should open its economic representation in Vilnius by the end of this year, despite China's objections.

"The Taiwanese representative office is going to be set up soon," Ming-hsin said as a Taiwanese business delegation is starting its visit in Lithuania. "I believe that will be before the end of this year. Our visit, hopefully, will lay a solid foundation for economic and trade cooperation."

Related articles
Lithuanian and other MEPs turn to EC over security of Chinese smartphones
President: EU shall look for ways to reduce dependence on China

Lithuania's decision to allow Taiwan to open its representation in Lithuania under the name "Taiwan" angered China as the latter is trying to prevent the island from acting as an independent country.

Elsewhere across the world, Taiwan's representations are named after "Taipei" under the existing international agreement that does not run counter to the "One China" policy that prevents Taiwan from being considered a separate country.

Due to the diplomatic dispute, China recalled its ambassador to Lithuania last summer and told Lithuania to do the same. Lithuanian Ambassador to China Diana Mickeviciene returned to Vilnius in early September.

Lithuanian businessmen say trade volumes with China have dropped significantly due to the diplomatic dispute between Vilnius and Beijing.

Taiwan to open its representation by end of year