Minister: troops to continue to help protect border with Belarus 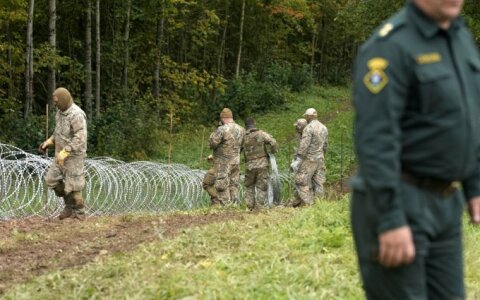 Lithuanian troops will continue to assist border guards in protecting the border with Belarus amid the continuing influx of illegal migration, Defense Minister Arvydas Anusauskas said on Tuesday.

"The Armed Forces have been providing support since early July and will continue to do so. As the agreed period ends this month, it will be extended for a few more months [...] until the situation changes substantially," Anusauskas told the public broadcaster LRT.

"The troops are making a really effective contribution to border protection," he said.

Military personnel are deployed to border areas where larger flows of migrants are likely to occur, according to the minister.

"[Border guards] know where the weak points are. For example, when groups of irregular immigrants started to push more towards the southern part of the country, larger forces have been deployed there," he said.

Related articles
Foreign Minister on note to Belarus: it's hard to talk diplomatically with 'criminals'
55 migrants turned away on border with Belarus

The Armed Forces are ready to respond to the situation with a rapid reaction force, too, the minister said.

"Taking into account the example of Poland, since we see that migrants are grouping up, a certain rapid reaction capacity is also foreseen, so that if a larger group were to be organized, more forces would be mobilized to that place, there would be more troops with equipment. There are mobile troops who would respond quickly to the situation," he said.

Almost 4,200 irregular migrants have crossed into Lithuania from Belarus illegally so far this year. A slightly larger number of attempts at illegal crossings have been foiled since August 2.

Minister: troops to continue to help protect border with Belarus