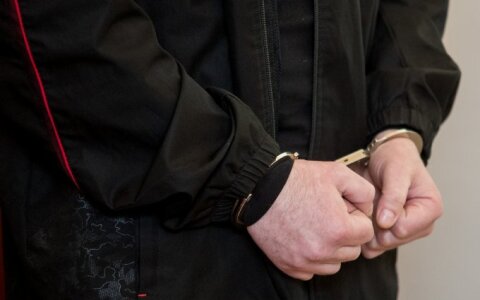 Oleksandr Radkevych, a Ukrainian citizen detained in Greece on a European arrest warrant issued by Lithuania, is a veteran of Ukraine's war against Russian-backed separatists, according to a document that BNS received on Thursday from Ukrainian human rights defenders.

The document from the Ukrainian Defense Ministry shows that Radkevych was a participant of the Anti-Terrorist Operation (ATO) in eastern Ukraine that started in 2014.

He served in Bakhmut, in Donetsk Oblast, for three shifts of several months each in 2015 to 2016.

"During this period, he was in the Ukrainian Armed Forces. Not just in volunteer battalions, but in the armed forces," Oleksandr Pavlichenko, head of the board of the Ukrainian Helsinki Human Rights Union which is organizing Radkevych's legal defense, told BNS on Thursday.

"He was a pure military man," added the lawyer, who also works on several councils and commissions advising Ukraine's president.

The document confirming Radkevych's status as an ATO veteran was issued on November 19, 2016.

The Lithuanian Foreign Ministry told BNS that it could neither confirm nor deny the information that the man wanted by Lithuania was an ATO veteran.

"The Foreign Ministry can neither confirm nor deny this information. Only the responsible Ukrainian authorities could clarify this," said Vytaute Smaizyte-Kuliesiene, spokeswoman for Foreign Minister Gabrielius Landsbergis.

Radkevych was detained in Greece in mid-September. Lithuania is seeking the extradition of the man who several years ago was sentenced in absentia to four years in prison for driving a tank involved in the bloody events at Vilnius' Press House.

Pavlichenko said that he will seek to stop Radkevych's extradition from Greece to Lithuania, and if he fails, he will appeal to the European Court of Human Rights (ECHR).

He said he sees "a whole series" of violations of Radkevych's rights, including his right to a fair trial, and called the sentence against him "far-fetched".

"He was convicted only because he wore the shoulder boards, although his guilt in any of the crimes where fourteen people were killed [was not proven]. He has no proven link to any of the victims," the lawyer said.

"Nevertheless, the verdict against him became final and his extradition is being sought," he added. "There are many things here that point to violations of the European Convention on Human Rights."

"If it is a political persecution, it takes on a different shade. In any case, we are ready to fight for him, because we believe that this is a disproportionate application of criminal law," the lawyer said.

"I am working on criminal cases and I think it is only a matter of time before this can be proven," he added.

Oleh Nikolenko, spokesman for the Ukrainian Foreign Ministry, told Interfax on Thursday that Kiev demands an objective and impartial consideration of Radkevych's case.

Ukraine's consuls are expected to visit Radkevych in a few days, according to the spokesman.

"On October 25, the arrested person should also be visited by Ukrainian consuls," the news agency quoted him as saying.

"The Ministry of Foreign Affairs of Ukraine has also involved other contacts with the Greek side, in particular through law enforcement agencies and the office of the Ombudsman. We insist on an objective and impartial consideration of the case, respecting the legal rights of a Ukrainian citizen."

"The consuls maintain regular contact with the Ukrainian, he is provided with Ukrainian and Greek lawyers, the conditions of his detention are acceptable. On October 22, the lawyer plans to come to Athens to defend the interests of our citizen when the prosecutor's office of the Supreme Court of Greece is considering an appeal against the decision of the district attorney of the Thrace region."

"According to our estimates, the consideration of the appeal may take several months," the spokesperson added.

Lithuanian law enforcement bodies say that Radkevych took part in a military attack on the Press House and intimidated people by maneuvering dangerously on the building's grounds.

The four-year prison sentence handed down to Radkevych is among the mildest punishments in the so-called January 13 case, as the court took into account the fact that he was a young man of 23 at the time of the crimes.

A total of 67 people were convicted in the mass trial.

Radkevych was among several convicts who unsuccessfully tried to appeal the Court of Appeal's judgement to the Lithuanian Supreme Court this autumn. The latter court did not accept the appeal.

Vilnius Regional Court issued the European arrest warrant, under which he was detained in Greece, in August.